You are here: Home » Rochester Esplanade 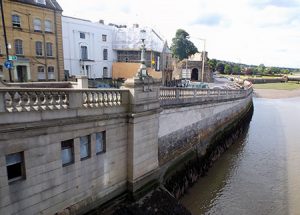 The section of Rochester Esplanade from the Old Bridge to just beyond Castle Hill is the property of the Rochester Bridge Trust. The Esplanade did not exist in its current form until 1856. It was constructed for the Trust by its engineer, Sir William Cubitt, as part of the works to build the original incarnation of the Old Bridge. Various changes have since been made to the layout of junctions and the alignment of the kerbs.

Originally there were landing steps from the Esplanade down to the river close to the bridge. The side rails of the steps can still be seen at low water. 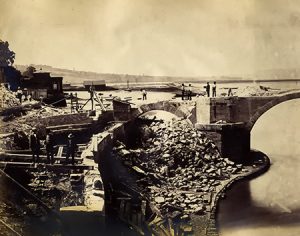 The stone pillars and rail which form the balustrade along the river wall were originally installed in 1793 on the medieval bridge. When that bridge was demolished in 1856, the balustrade was reinstalled along the Esplanade. It was listed Grade II in 1950.

Underground lavatories for public use were constructed during the reconfiguration of the Old Bridge (1911-14). These were decommissioned and the staircases removed in 1975, with the chamber permanently filled in 2019. You can find out more about the lavatories here. 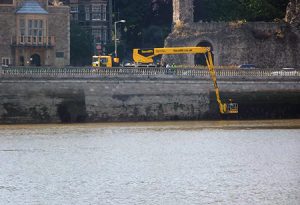 The footway and kerbs were added in the 1920s to protect the balustrade from accidental impact by traffic. The parking spaces adjacent to the river wall are on private land although the Trust currently makes these available for public use when not needed for the charity’s own purposes.