You are here: Home » Bridges » Historical Bridges » The Medieval Bridge

In February 1382 a royal commission was appointed to decide who was responsible to repair the ruined Roman bridge. The commissioners, who included Henry Yevele, the best English architect of his time, and the powerful Kentish knight and landowner Sir John de Cobham, concluded that Rochester needed a new bridge with stone arches. Sir John recruited the help of another wealthy knight, Sir Robert Knolles, and between them they paid for the construction of a new stone bridge 100 yards upstream from the remains of the Roman bridge. Construction began in August 1387 and finished in September 1391.

The new medieval stone bridge was 560 feet long and 14 feet wide. The piers were built on protective platforms called starlings. These platforms, each about 40 feet wide and 90 feet long with cutwaters or pointed ends upstream and downstream to deflect the current, consisted of over 10,000 piles driven into the riverbed, tied together with joists, and covered with elm planking after the spaces between the piles had been packed with chalk. On top of these wooden platforms Henry Yevele built twelve stone piers, with all but one of the eleven intervening spaces spanned by stone arches. The fifth opening from the Strood side was crossed by a wooden drawbridge. On top of the bridge the surface of the roadway was paved with ragstone. 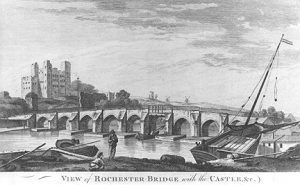 To pay for the maintenance and repair of the new stone bridge, Sir John de Cobham and Sir Robert Knolles petitioned Richard II and received a royal patent in 1399 establishing the Wardens and Commonalty of Rochester Bridge and granting them power to own property and to use the income to maintain the bridge. Through the continued efforts and generosity of Sir John de Cobham and further royal grants of Henry IV and Henry V, the Wardens and Commonalty accumulated properties in Kent, Essex, and London and over the centuries have used the rental income to maintain the bridge. Many of these properties still belong to The Rochester Bridge Trust today. 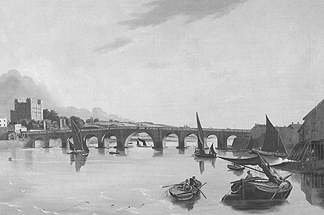 Although constantly repaired, the medieval stone bridge continued to provide the only crossing at Rochester for almost 500 years. During this time both the river traffic and the road traffic increased steadily, and in the late 18th century the Wardens and Assistants of Rochester Bridge extensively modernised the bridge. They widened the roadway from 14 to 26 feet and added a footway on either side. They reduced the width of the starlings, so that larger boats and barges could pass through the arches; and most importantly they removed the sixth pier from the Strood side, along with the adjacent arch and drawbridge, and replaced it with a large central arch. The programme of refurbishment and modernisation of the stone bridge was completed in 1824.