The Rochester Bridge Trust has provided and maintained crossings of the River Medway for more than 600 years – with the first bridge on the site built almost 2,000 years ago – but there is still much that remains unknown about the organisation among the general public, as visitors to the Bridge Works exhibition have been discovering. 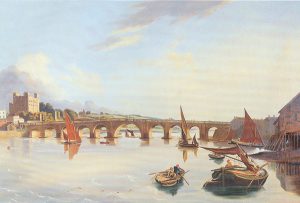 Originally housed in the Crypt of Rochester Cathedral, the exhibition proved so popular that its run was extended, then it relocated to the Medway Archives Centre in Strood, followed by Tonbridge Castle. It is now found at Maidstone Museum.

Andrew Freeman, Operations Manager of the Rochester Bridge Trust, explained: “We’re really pleased by how well received the Bridge Works exhibition has been. It opened in November 2017 and was only supposed to run until June, but so many visitors came to see it that the Cathedral agreed to extend the exhibition until December.

“As the Rochester Bridge Trust contributed towards Maidstone Bridge, we are pleased to be able to take the exhibition to the County Town of Kent.”