You are here: Home » About Us » The Bridge Chapel » Heritage Open Days online

Cross the threshold to discover six centuries of history

Did you know Rochester is the location of a rare type of medieval chapel?

Nestled on the bank of the River Medway, next door but one to Rochester Castle, is a medieval Bridge Chapel that is one of just a handful of such chapels to still be in existence – and it is now virtually opening its doors for the Heritage Open Days initiative.

The Bridge Chapel was built in 1393 by Sir John de Cobham, one of the founders of the Rochester Bridge Trust and one of the two men responsible for organising and funding the construction of the medieval bridge. Located at the eastern approach to the crossing, it was known as Allsoulen Chapel and offered a place of thanksgiving prayers for travellers and pilgrims.

However as time passed, so the use of the Chapel changed, and in 1547-48 the English Reformation brought about the dissolution of Chantry Chapels. 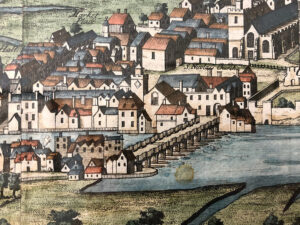 It’s worth noting the area as a whole was very different too, as this 1719 print shows. Unrecognisable today, the Bridge Chapel is surrounded by other structures. It’s the building one row back from the river, to the left of the bridge – the window and roof are recognisable, but the clock tower no longer remains. Many buildings cram the riverfront that is today the open space of Rochester Esplanade.

In 1735 the Bridge Chapel itself changed, when a porch was built on the front to create a storage area for the bridge archives or ‘muniments’.

Then by the 1800s its use had changed again, as it was used for various purposes such as storage for bridge maintenance materials, a sweet shop, a house and even a pub.

In 1856 the Bridge Chapel bore silent witness to the demolition of the medieval bridge, its companion for almost five centuries, when Sir William Cubitt replaced the crossing with a more modern cast iron structure (now known as the Victorian Bridge). This took the road back to the route followed by the Romans, some 100 yards downriver.

The buildings surrounding the Bridge Chapel (including the Queens Arms pub) were demolished in 1879 to make way for a new Bridge Chamber next door – this is the structure we are familiar with today. At the time of this demolition work, the porch was also dismantled, revealing the original, slightly less well loved, Bridge Chapel.

By the 1900s an interest in restoration began to develop. In 1912 the Chapel was surveyed by Harold Brakspear, who made recommendations. As did William Weir in 1927. Then finally, in 1937, the promised restoration happened, when Sir Herbert Baker RIBA, led a project to re-roof and re-glaze, as well as tiling the floor and installing wood panelling. This evolution of the Bridge Chapel is the structure we have today.

Step inside the Bridge Chapel