You are here: Home » Bridges » Other Medway Crossings 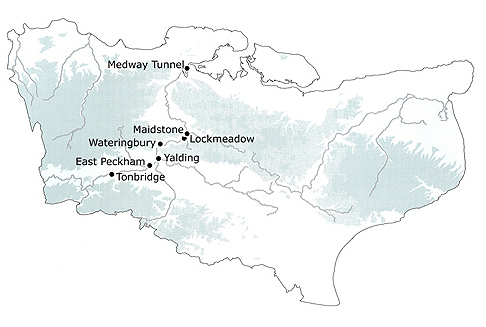 The Charity Commission schemes regulating the Rochester Bridge Trust during the nineteenth and twentieth centuries have empowered the Trust to use its income for “the passage over, under, or across the River Medway” and also for “the maintenance of the banks and channels of the River Medway”. Accordingly, for well over a century the Trust has contributed towards the cost of most of the Medway crossings, beginning with £20,000 for the Maidstone Bridge in 1879. During the 1880’s the Rochester Bridge Trust spent additional sums of £3,000 to improve the Strood Embankment, £4,500 to construct the Sun Pier at Chatham, £1,200 for the Rochester Pier, and £1,750 for rebuilding and widening the Great Bridge at Tonbridge.

During the twentieth century the Trust used most of its income for the reconstruction of Rochester Bridge between 1910 and 1914 and the duplication of Rochester Bridge between 1965 and 1970. In addition to these major projects at Rochester, however, the Rochester Bridge Trust continued to contribute toward other Medway crossings: £2,000 to the Hampstead Lane Bridge in Yalding in 1904, an additional £2,000 towards the extension of the Sun Pier in Chatham in 1905, over £7,000 towards the renovation of the Branbridges at East Peckham between 1905 and 1908, £1,000 for the Hartlake Bridge at Hadlow in 1910, £1,000 for the Bow Bridge at Wateringbury in 1915, and £17,000 for the widening of the Maidstone Bridge between 1926 and 1936. In addition to these bridges and piers, the Trust contributed over £6,000 between 1915 and 1935 toward various embankment improvements carried out by the Upper Medway Conservancy Board and for many years stood committed to fund substantially the proposed bridges at Aylesford, Halling, and Snodland – all of which failed for lack of County support. Between 1992 and 1996 the Rochester Bridge Trust helped to build the Medway Tunnel between Chatham Dockyard and the Frindsbury peninsula and has made voluntary contributions toward the annual cost of tunnel maintenance. More recently, the Trust contributed £130,000 in matching funds for the Lockmeadow Millennium Bridge at Maidstone.