You are here: Home » Bridges » Historical Bridges » The Roman Bridge 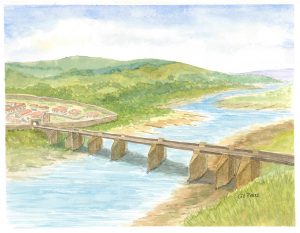 Over the centuries before the modern day road bridges there have been three other bridges at Rochester: the Roman bridge, the medieval bridge, and the Victorian bridge. The Roman bridge crossed the River Medway on the line of Watling Street, the main Roman road running from London to Richborough and Dover on the Kent coast. Built soon after the Roman conquest under Claudius in 43 AD, the first bridge across the Medway had nine stone piers constructed on foundations deep below the riverbed. Archaeological evidence of these foundations was found during construction work in the 19th century. 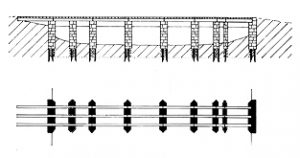 For each pier the Romans built a coffer dam in the river, consisting of a double ring of piles driven into the riverbed. The space between the rings was packed with clay to form a watertight barrier. Inside this double ring the Roman engineers extracted the water, removed the silt from the riverbed, and drove oak piles tipped with iron into the chalk bedrock. Then, on this foundation they constructed a timber framework, surrounded it with stone masonry, and filled the centre with ragstone rubble to form the pier. Medieval records show that there were nine of these piers standing in the river at irregular intervals. On top of these stone piers the Romans placed a flat timber roadway, consisting of three oak beams stretching between each pier with planks laid across the beams to form the surface of the road.

In the parishes surrounding Rochester the manors and estates belonging to the king, the archbishop, and the bishop of Rochester were each responsible for keeping a section of the bridge in good repair. Whenever the bridge needed repair, a royal commission consulted the bridgework list kept by the bishop of Rochester and assigned responsibility for repairs. This system worked for centuries until the cold winter of 1381, when the River Medway froze solid. According to the Winchester Chronicle, when the ice melted in February, the combined pressure of flood waters and ice carried away “the great part of the bridge”.