You are here: Home » Events & Resources » All Souls’ Day

The founders and benefactors of Rochester Bridge

The foundations for what was to become the Rochester Bridge Trust were established in the late 14th century, when Sir John de Cobham and Sir Robert Knolles organised and paid for the construction of the medieval bridge. Sir John de Cobham’s family seat was only 3.5 miles from Rochester and he was one of the customary contributors to the maintenance of the old Rochester Bridge that had collapsed in 1391. He was a leading figure in Kent society and was one of the commissioners appointed in 1382 to investigate who had money and materials belonging to the bridge and to establish who was responsible for the repair.

Sir Robert Knolles was a Cheshire Knight with a long, adventurous and profitable war record. He was in London at the time of the Peasants’ Revolt, and distinguished himself in organising the citizens of London to resist the rebels. Sir Robert’s Kentish connections were tenuous and he seems to have been drawn to helping the bridge as a pious and worthy cause. His murderous reputation from his time in France was notorious and Lombarde surmised that Knolles was aiming “some way to make himselfe as well beloved of his countrie men at home as he had been very way dread and feared of straungers abroad”. The two men organised and paid for the construction of the medieval bridge, which was completed by November 1391.

Thomas of Walsingham described the bridge as “sumptuosissimus”, which can be translated as “most magnificent”. Subsequently the two founders obtained letters patent from King Richard II which allowed the parishes that had always been responsible for the Roman bridge to be formed into a Commonalty. Donations of land and money were collected for the perpetual maintenance of the bridge and thus, in 1399, the Wardens and Commonalty of Rochester Bridge (now known as the Rochester Bridge Trust) was founded.

Establishing the Rochester Bridge Trust and the Bridge Chapel 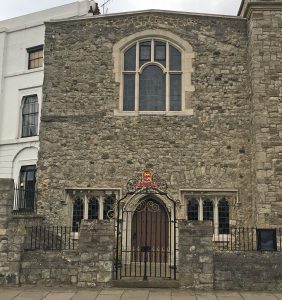 When the Rochester Bridge Trust was founded by letters patent of King Richard II in 1399, most major medieval bridges had a chapel where travellers could pray, in much the same way as airport chapels are used today, and where a priest offered prayers for those who had founded or maintained the bridge. At Rochester, Sir John de Cobham founded such a chapel during the building of the medieval bridge in the late 14th century. Described as “newly constructed” in January 1393, the Bridge Chapel was dedicated to All Souls. Three chaplains, each receiving an annual stipend of £6, celebrated Mass daily and prayed for the souls of the Cobham family and for the founders and benefactors of the bridge.

Traditions and the All Souls’ Day service 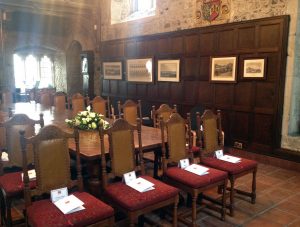 During the Reformation, the Bridge Chapel – along with other chantry chapels throughout the country – was suppressed by Edward VI. Worship in the Bridge Chapel ceased, and the building eventually fell into such disrepair that the roof collapsed. In 1937, the Wardens and Assistants of Rochester Bridge commissioned the architect Sir Herbert Baker to restore the chapel; and in 1990 the celebration of Holy Communion was revived in the Bridge Chapel on All Souls’ Day. The annual service has now become a continuing tradition commemorating the founders and benefactors of the bridge.

In 2017, while the Bridge Chapel awaits internal refurbishment work, the Trust was delighted to be granted permission to hold the service in the Chapel of St Ithamar in the newly renovated Crypt of Rochester Cathedral. Consecrated as Bishop of Rochester in 644 AD, Ithamar was the first Saxon-born bishop in England. He was buried in the old Saxon cathedral at Rochester and was canonised after a number of miracles were reported by visitors to his tomb, including the restoration of the sight of a blind monk. In the late 11th century, Ithamar’s bones were moved by Gundulf to the new Norman cathedral and his shrine became a popular destination for medieval pilgrims. No doubt many of these pilgrims would have used Rochester Bridge.

Joan, 4th Baroness Cobham, the granddaughter and successor of Sir John de Cobham, had close connections with the pre-Reformation Lollard movement. In fact, her fourth husband, the Lollard leader Sir John Oldcastle, was eventually burnt at the stake for rebellion and heresy in 1417. The Lollards insisted on reading the bible in English, as argued by Oxford scholar and preacher John Wycliffe (1331-1384): “it helpeth Christian men to study the Gospel in that tongue in which they know best Christ’s sentence.” During the late 14th and early 15th centuries many manuscripts of Wycliffe’s bible, translated from the Latin Vulgate by, or under the direction of, John Wycliffe were circulating throughout England. Given the Cobham connection with the Lollard movement, the early priests in the Bridge Chapel may have used Wycliffe’s bible.

The readings in the modern day service are taken from that medieval translation. Traditionally, only priests would have received the bread and wine, but this modern day celebration of the Mass follows the movement since the Reformation towards greater participation by the laity and the unity of Christians of all denominations.