You are here: Home » Bridges » Historical Bridges » The Victorian Bridge 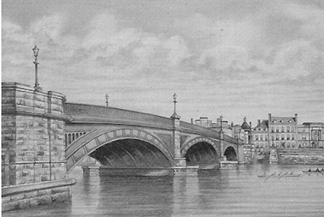 The modernisation of the medieval stone bridge proved to be only a temporary solution to the increasing road and river traffic. During the 1840s the Wardens and Assistants of Rochester Bridge considered proposals designed by Bridge Engineer Sir William Cubitt for a new stone bridge of five arches, a suspension bridge, or a cast iron bridge of three arches. At the insistence of the Admiralty they finally decided on a cast iron bridge with three arches and a swing bridge over a ship’s passage so that ships with fixed masts could navigate upriver.

The new bridge was 40 feet wide with a combined span of 485 feet over the three arches. The Strood arch and Rochester arch were each 140 feet long, and the central arch was 170 feet long with 18 feet of clear headroom above high water. Although delicate in appearance, the massive cast iron structure weighed over 2500 tonnes and rested on foundations of cast iron cylinders sunk through the riverbed to the bedrock beneath.

At the Strood end of the bridge was a ship’s passage 50 feet in width with a swing bridge that could be opened upriver to allow vessels with fixed masts higher than 18 feet to pass through the bridge. The swing bridge consisted of six wrought iron girders turning on a cast iron roller path, 30 feet in diameter with 30 cast iron rollers. In the centre was a wrought iron screw, 11 inches in diameter, attached to apparatus for elevating the centre. A marvel of Victorian engineering, the swing bridge was so delicately balanced that, even though the total weight of the swing bridge and roadway was over 300 tonnes, it could be rotated with ease 90 degrees upriver. 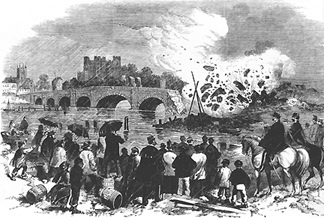 The Rochester Bridge Act 1846, granting the Wardens and Assistants of Rochester Bridge the powers to replace the bridge, received Royal Assent on 14 May 1846. The placement of the new bridge on the line of Watling Street and the old Roman bridge required the purchase of considerable property in Strood before construction could begin. The first contract for the bridge foundations was finally signed in January 1850, and six years later the construction was completed. On 13 August 1856 the Wardens and Assistants, accompanied by a Royal Marine band and the mayors and aldermen of Rochester and Maidstone, processed across the old bridge, along the Strood Esplanade, and back to the centre of the new bridge, where the Victorian cast iron bridge was officially declared open to the public and the medieval stone bridge was declared closed. The momentous day concluded with a public dinner and a fireworks display from the old bridge in the evening. Even more spectacular fireworks from the old bridge followed over the next six months as the Royal Engineers practiced their demolition skills by blowing up the stone structure which, though much repaired and rebuilt, had crossed the River Medway for 465 years.