You are here: Home » Bridges » Other Medway Crossings » Medway Tunnel

In 1982 the Chatham Naval Base closed, and the greater part of it, renamed Chatham Maritime, became available for commercial development. In 1986 Kent County Council conducted a feasibility study for a new Medway crossing and a northern relief road around the Medway Towns. Planners considered another high level bridge like the M2 bridge, a low level bridge with an opening span to permit shipping to pass up and down the river, or a tunnel underneath the river between Chatham Maritime on the east bank and Frindsbury on the west. After public consultation planners decided on a tunnel, but the project was far too expensive for the county to build alone.

In 1987 Kent County Council enlisted the help of The Rochester Bridge Trust. The Medway Tunnel Bill, promoted by the Trust, was submitted to Parliament in November 1988. On 26 July 1990 the Medway Tunnel Act finally received Royal Assent, granting to the Trust the power to build and own the tunnel. English Estates, which was responsible for regenerating the former dockyard, contributed £10 million toward the tunnel cost, a lump sum which had increased to £15 million by the time construction began. The Trust contributed another £5 million, including purchasing all the necessary land. In November 1991 Kent County Council received a transport supplementary grant from the Department of Transport (50% grant and 50% approval for borrowing), enabling the county to pay for the Wainscott Northern Bypass (£55 million), the Gillingham Northern Link (£40 million), and the remaining cost of the Medway Tunnel (£60 million). 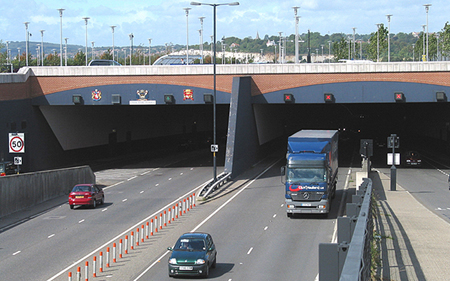 Tenders for construction of the Medway Tunnel, based on detailed designs produced by the Trust’s engineers, Mott MacDonald, were invited in autumn 1990. The Trust then delegated to the county council its powers to build the tunnel and to operate it for 999 years. In June 1992 the contract was awarded to a joint venture between Tarmac Construction Limited and HBM Civil Engineering Limited. Construction began in July 1992, and the tunnel was opened on 12 June 1996 by HRH Princess Anne.