You are here: Home » About Us » The Arms and Crest

The Arms and Crest

Traditional shield of the City of Rochester 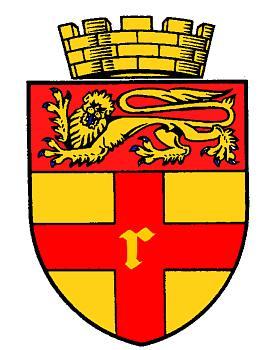 The Rochester arms are unusual for the inclusion of a letter of the alphabet. The lion on Rochester’s shield recalls that Rochester was originally a royal borough. Since the Trust was founded by the letters patent of King Richard II, the lion is, perhaps, also appropriate for use in the Trust’s arms.

The coats of arms of the Trust’s founders appear in several places in the Bridge Chamber and Bridge Chapel. These ornamental plaster rondelles, originally displayed in the 18th-century Bridge Chamber, now appear above the doorway to the modern Bridge Chamber courtroom.

For the Rochester Bridge Trust’s Coat of Arms in current use the blazon is as follows:

“Gules, in chief a lion passant Or; in base dexter on a chevron Argent, three roses gules barbed and seeded proper; in sinister on a chevron Or, three lions rampant sable; The shield ensigned by a mural crown Or; mantled Or, doubled Gules upon a wreath Or and Gules.”
The motto  – publica privatis – can be translated as “public works from private means“.

© The coat of arms may not be reproduced for any purpose without the permission of the Rochester Bridge Trust.