You are here: Home » Bridges

The Bridges at Rochester 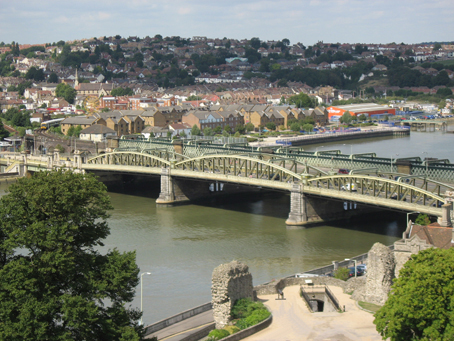 The Rochester Bridge Trust has built and maintained numerous Medway crossings since medieval times. In the late 14th century the old Roman bridge was destroyed by winter storms. The medieval bridge constructed in its place had eleven stone arches and a drawbridge. Concern about the deposit of silt in the riverbed led in the 1820s to the alteration of the medieval bridge to provide a large central arch and eventually in the 1850s to the construction of a new cast iron Victorian bridge with three arches and a swing bridge.

Between 1910 and 1914 this 19th century bridge was reconstructed and arches were installed in their present position above the roadway, to provide more clearance for shipping under the bridge. Between 1965 and 1970 the Rochester Bridge Trust built a second roadway bridge on the piers of the disused railway bridge immediately downstream from the roadway bridge. Today, the reconstructed Victorian bridge is known as the old bridge, and the second roadway bridge is known as the new bridge.