A trail of bridges – adventure golf

In August 2019, to coincide with the school summer holiday, the Rochester Bridge Trust installed a nine-hole bridge-themed adventure golf course in the Nave of Rochester Cathedral.

Nine holes of adventure golf may not be the most obvious way to develop an interest in engineering, but some of the best lessons are those taken in when you’re concentrating on other things, or in this case learning through play.

The course has been created using a selection of models of real-world bridges, some are historic, some are examples of types and some can be visited and recognised today. Here we take you around the course, introducing you to some of the engineering to be learned when attempting to achieve a hole in one. 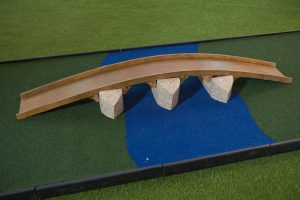 The Romans built the first major bridge over the River Medway at what is now known as Rochester. It was a beam bridge with a wooden deck on stone piers – for those readers wondering what that means, the accompanying information panel reveals all. Built almost 2,000 years ago, this bridge was three metres wide and had no sides! 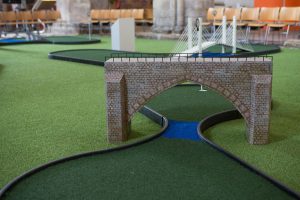 A masonry arch bridge, this model shows one span of the bridge that led to the creation of the Rochester Bridge Trust. The information panel tells the history of the crossing and introduces participants to the different parts of the arch bridge they are putting their ball underneath. 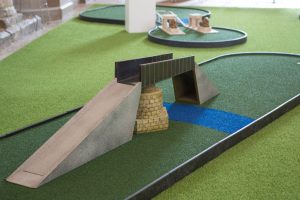 The Industrial Revolution had a big impact on road and river traffic, meaning the bridge at Rochester had to be replaced to accommodate both. Eminent engineer Sir William Cubitt designed a cast iron arch bridge with a swing section that could move to allow tall ships to pass upriver. The swing section is illustrated in the model at hole three – and the information panel includes an astonishing fact about this marvel of engineering. 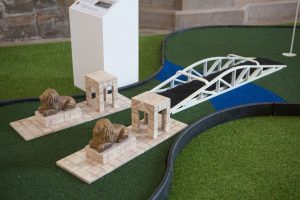 The current bridge at Rochester is a bowstring truss which utilises the piers of its predecessor. As well as discovering the parts of this bridge, participants can learn what made the structure of a truss bridge so popular in the 19th century. The model also has a likeness of this historic crossing’s guardian lions, making it identifiable as the bridge many local children use on a daily basis. 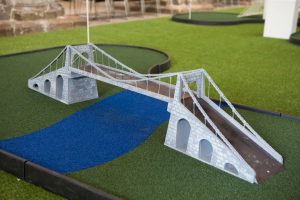 We now leave Kent to visit a particularly famous suspension bridge. Its connection with the Rochester Bridge Trust is Thomas Telford, who was appointed Bridge Engineer to the Trust while working on construction of the crossing. The accompanying diagram explains why suspension bridges can cross long distances. 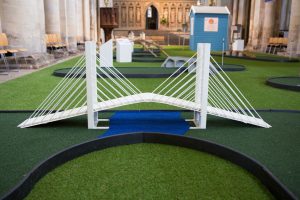 When opened by Queen Elizabeth II in 1991, this was the longest cable-stayed bridge in Europe. Here, as well as finding out more about this bridge and the forces acting upon the structures in general, participants learn the differences between cable-stayed and suspension bridges. 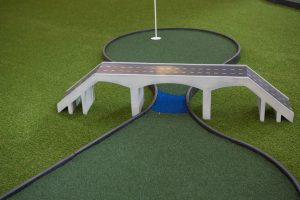 It could be easy to dismiss this model as ‘just a motorway bridge’, but to do so would be to dismiss a remarkable piece of engineering. All three of the Medway viaducts are cantilever bridges, these are structures which are only supported at one end – but you will have to read the information panel to find out how that works. 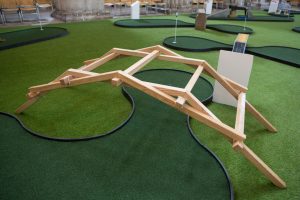 Known as his ‘emergency’ or ‘self-supporting’ bridge, this structure was designed by the famous Renaissance artist. It can be easily replicated using nothing more complicated than a few pencils or lollipop sticks and is among the free resources the Trust loans out to education groups. 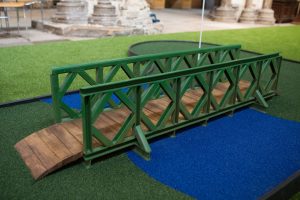