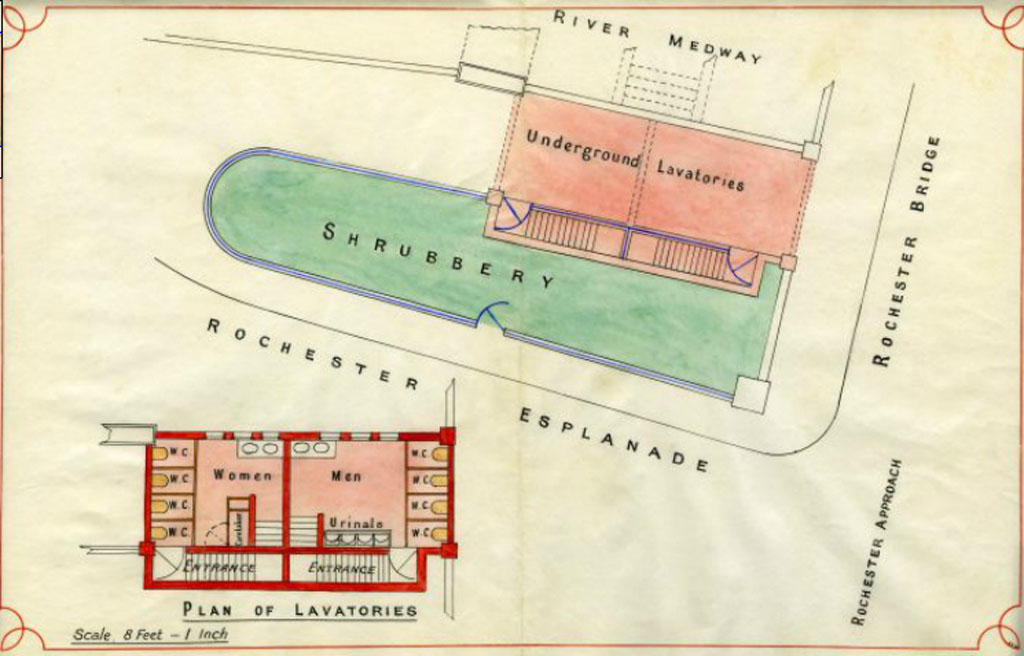 Filling the void – a history of the Rochester Esplanade lavatories

The Rochester Bridge Trust can now confirm the void left by the disused lavatories under Rochester Esplanade has been filled. When we have previously shared information about that part of the Esplanade there has been a lot of interest from the public so this Bridge Engineer’s Blog aims to set out more about its history.

The public lavatories had been out of use for over 40 years and all the fixtures and fittings and the steps down were removed decades ago. The steelwork which held up the roof of the void was deteriorating significantly and a large number of temporary steel props had been installed. Despite there being nothing of interest to see, there were some incidents of trespass and a continuing problem of keeping pigeons out. Now the space has been properly filled in so the area has been made permanently safe and secure for the future.

The issue of public conveniences goes back a long way in the history of Rochester Bridge. In April 1824, bridge engineer Thomas Telford arranged for “fences to be erected in some of the recesses on the bridge …. for persons to make water in and thereby prevent the nuisance which is now frequently occasioned”.  This was on the old medieval bridge and he was addressing a problem which had been on going for many years.

By 1856, Telford’s bridge had been replaced by a smart new cast iron arched bridge to the design of Sir William Cubitt. Known as the Victorian Bridge, this striking crossing evidently suffered from the same problem and hence a public urinal was installed instead of just the rudimentary fences. 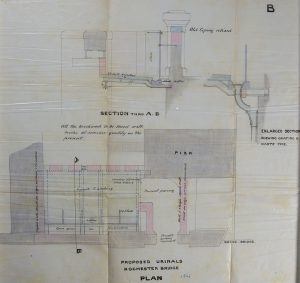 Fifty years later, when the Victorian Bridge was being reconstructed to become the Old Bridge we have today, the urinals had to go. Times had changed and the idea of stopping to answer a call of nature in so public a place was no longer acceptable.

The Rochester Corporation asked the Trust to consider providing new public conveniences to replace the urinal. Most of the Wardens were unhappy with this suggestion as it fell well outside the remit and duties of the Trust and the suggested prominent location at the end of the Old Bridge was considered to be unsightly. Bridge Engineers Arthur Hurtzig and John Robson were asked to draw up proposals which might be acceptable.

The engineers came up with a solution (as us engineers are wont to do). They suggested providing lavatories under the pavement, with steps down, and “In order to form a screen… a small shrubbery … be formed in between the footway and roadway …”.

Their suggestion was accepted, and the Wardens agreed to provide the lavatories on their land. The work was carried out at the time of the bridge reconstruction. On 25th March 1914, the facility was leased to the Rochester Corporation for a starting cost of £52 per annum. The lavatories remained in use for the next 60 years under the management of the Corporation but the awkward, very steep, access and problems with assuring personal safety meant the arrangement had fallen out of favour by the 1970s.

In 1975, notice was given on the lease and the lavatories were officially closed. They have been replaced by the purpose-built public conveniences with level access located opposite the Corn Exchange, a few minutes’ walk away on Northgate.

At the time of the closure there were discussions about possible alternative uses for the space, but the narrow and steep access made it unusable for most activities and unacceptable by today’s accessibility standards. Enlarging the stairwell to make the access manageable would have taken up most of the available space and there were other challenges in providing ventilation and security and maintaining the structure. It was soon concluded there  were no viable or sensible other uses for this hole in the ground so the fittings were removed. All that remained were the plain white tiles on the walls, a ladder for engineer’s inspections and the props to support the roof.

Over the following decades, regular safety checks, structural inspections and maintenance were required, and the risk of unwanted visitors continued. Therefore plans were drawn up to address the issue once and for all as part of the current Rochester Bridge Refurbishment Project. Other works to the Esplanade to improve drainage and repair the River Wall provided an opportunity to fill the void. 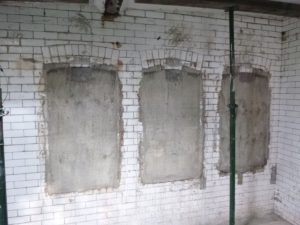 The windows were blocked up first and then 46 cubic metres of concrete was delivered to the site. The concrete was then “foamed” to fill it with air bubbles to expand the material and keep it as light as possible to fill the 124 cubic metre void. Over the coming months new paving will be laid and benches installed to create a safe, open and welcoming space from which people can enjoy views of the river and Old Bridge. 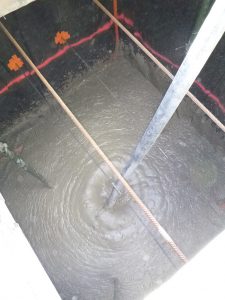