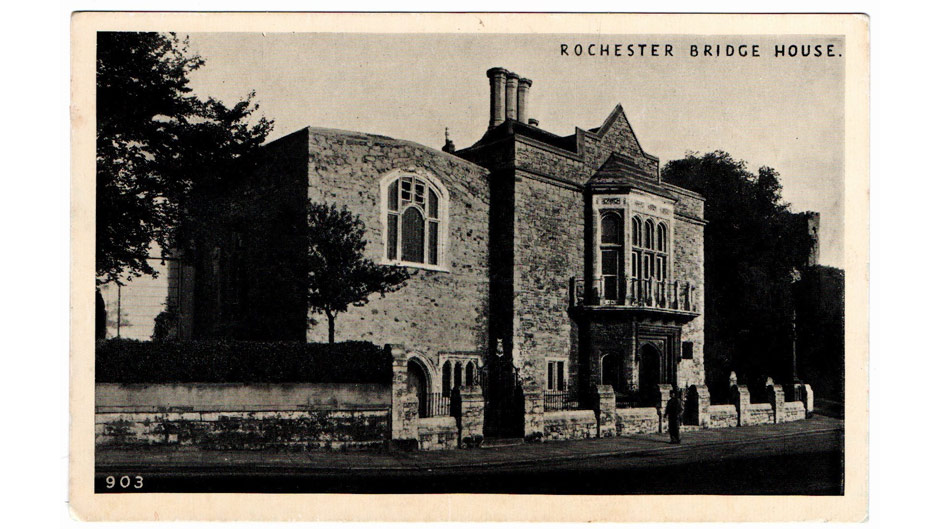 Having stood on the bank of the River Medway for more than 600 years, the Bridge Chapel has witnessed its fair share of history, it also has its own stories to tell.

The first record of Rochester’s Bridge Chapel is from January 1399, when it is described in the archives as “newly constructed”. This is followed by more than 150 years of continuous service as a chapel, when it was a place for travellers to stop and pray for safe crossing of the bridge. That may seem an odd idea today, but back then bridges were much less common and travel in general could be a dangerous activity.

Then came the Reformation, and in 1548 the Bridge Chapel was suppressed. This started a new, secular, chapter in the Chapel’s life, when it was variously used as a storeroom, home, pub, and even a fruit and sweet shop. 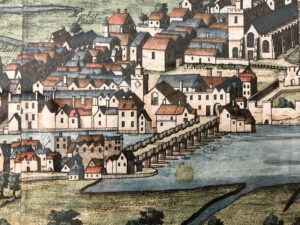 Further changes came about as buildings surrounding the Chapel were removed so that by the late 1870s it had become little more than a ruined shell. Some items of interest – such as the medieval minstrels gallery – could still be identified.

But what of the story of the Chapel’s resurrection and restoration to the usable building we have today?

In the mid 1870s, architect Martin Bulmer was asked to draw up plans to alter the then Bridge Chamber (a very different building to the one we have today) and to restore the Chapel. However before these plans could be followed up they were changed, as a Charity Commission ruling at the time decided that funds could only spent on maintaining – not restoring – the Chapel. Also the sudden availability of an additional piece of land at the site meant the Chamber could be newly built, rather than renovated. The outcome, in 1880, was the Victorian Bridge Chamber we still have today, which is now Grade II-listed.

Unable to restore the Chapel, the Wardens of the day instead resolved it would not be used for commercial purposes again. They may have been unable to revive the building, but they would do everything they could to respect its heritage.

This began with construction of a new boundary wall and the removal of a front porch – by Messrs Foord – which had been erected some 200 years previously. A plaque that now sits inside the south wall of the chapel commemorates construction of that edifice to house the archives/muniments in 1735.

Next came years of surveys and reports. These commented on the state of the structure and the need to rebuild the roof and repair and reglaze the windows, with a 1929 report by Sir Herbert Baker estimating the cost for these works to be around £1,000.

Very little happened for another six years, until in 1935 the then Senior Warden raised the issues outlined in Baker’s report and requested a full estimate. At the time Baker had suggested the Chapel could be used as a board room for meetings of the Court of Wardens and Assistants, hence the inclusion of oak panelling in the quote, which all together added up to just over £2,703. 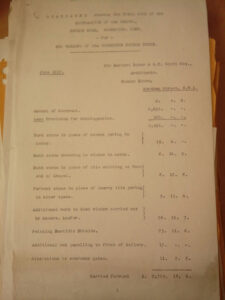 Changes to the way The Charity Commission operated meant the organisation was now happy to allow the refurbishment to go ahead at a cost of £2,500, and in 1936 the tender to undertake the works was won by J H Durrant.

Completed in 1937, the total cost of the refurbishment – which included the addition of the coats of arms of the Chapel founders in the East Window – was £2,571. The work currently being undertaken is the first major refurbishment since the building’s rehabilitation more than 80 years ago. 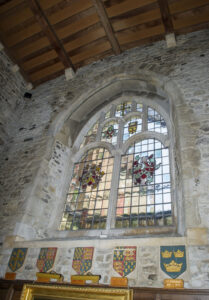 You can read a more detailed history of the Bridge Chapel here.