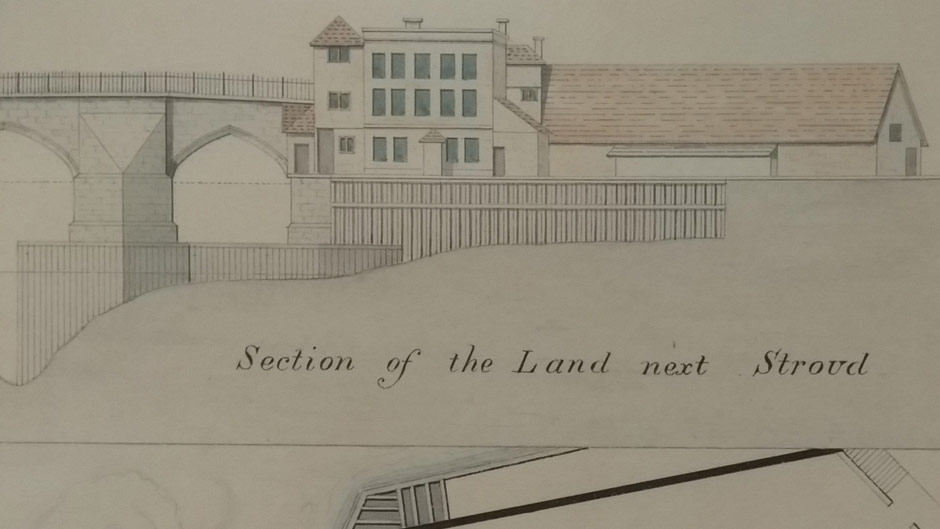 Notes from the archive: A 1740 inventory

Anyone who has carried out historical research that involves looking at old wills may have come across inventories – documents that list the belongings of the deceased person.

They are generally the most interesting part of the record because they help to form an image of what the person’s house might have been like and what was kept in each room. This document from the Rochester Bridge Trust archive is quite similar.

This inventory, dated 16 May 1740, is one of a series of administrative records created by the Trust and would have been used as part of the audit process. 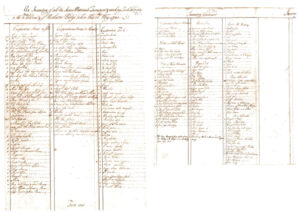 It concentrates mainly on the items held in the stores, and also in the Bridge Chamber which includes some furniture and desk items. Much of the inventory – in fact the entire first page – is taken up with the carpenters’ stores and tools. We can see that stores in the timber yard consist mainly of fir, elm, deal and oak.

A few terms appear that are no longer in general use, for example ‘ginn’, which was perhaps a type of horse drawn engine. In among the list of baulks, rams, joysts, elm girders and slabs, is mention of two ‘bumble carts’. There is then a detailed list of carpenters’ tools, many of which we can recognise such as axes, hand saws, chissles and augers. There are two adzes listed which are a type of arched blade axe for cutting away the surface of a piece of wood.

Having already listed the carpenters’ stores in the yard, house, brickhouse and slabb house, the list moves on to the Bridge Chamber store house (the medieval Bridge Chapel was once used for storage and so this could be the area being referenced) where various floor boards, old doors, shutters, the top of a Spanish table and three straining frames are kept. There is also a note about the iron parapet fence taken from the bridge and lodged under the bridge staircase.

I have cross referenced this list of locations with a plan and elevation that is in the heritage collection, which dates from around the late 1770s. As well as the elevation and plan of the bridge there is a plan of buildings and the timber yard at the Strood end, including the saw pit, storehouse, carpenters’ shop and masons’ shop. Although this image dates from almost 40 years after the inventory, it is very likely that this is the layout being described in the document. 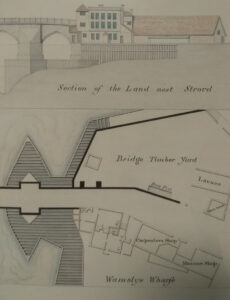 The inventory then moves on to list the masons’ stores, which seem to be in various locations, including the yard of the Crown Inn; ‘parcels of olds stones and ashler on the Bridge’; a parcel of rubble on the ‘Stroud’ side, and a parcel under the Bridge. There is also a note of a ‘parcel of ashlers stored under Tupper’s House’. An ashler is a block of hewn stone that can be used for construction.

The inventory’s final column is headed ‘Lighters and Boats’ etc. The list underneath includes one chalk lighter, ‘chalk carts at wharfe’, two boats, and several oars and cables.

The final section relates to the Bridge Chamber. This lists a number of pieces of furniture (including the then quite new walnut and leather chairs  and a painting of the medieval bridge, which the Trust still owns) and everyday items such as brooms, bellows, pokers and fire shovels and ‘a large mahogany chest at Mr Pilchers’.