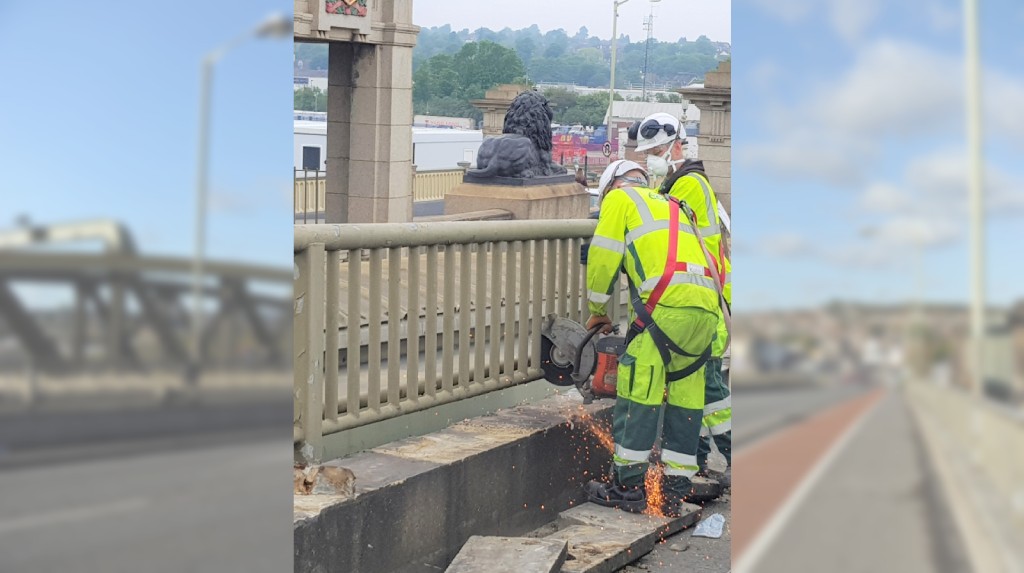 As many travellers will have noticed, there’s a temporary road layout on the New Bridge.

The layout of the bridge has been adjusted to remove the footway and cycle lane temporarily, shifting the two traffic lanes closer to the railway bridge. This enables work to be carried out on the upstream side of the New Bridge safely and with minimal impact on traffic flow.

But what exactly is happening and why did the road need to change?

At the time of writing some slow but complicated work is being carried out to remove the sealant around the parapets (the ‘rail’ on the edge of the bridge), and then to cut away the steel parapets themselves.

In order to keep the two lanes of traffic running, the space available to work in is quite restricted, so the removal of the parapet is being done using hand tools on one side of the bridge at a time. Each section is kept short so that the weight is a safe limit for lifting away by the workforce.

Working on the bridges is more complex than an ordinary highway because of the additional risks of working above water, which brings the need for additional safety measures.

So why are we doing this difficult job?

The New Bridge still has the parapets and lighting system that was installed during its construction – given the crossing was officially opened in 1970, they have lasted a long time, but now is the time to bring these items up to modern day standards.

Look closely at the bridge and you’ll realise the lamp columns are incorporated into the parapet. There is nothing wrong with this as such, but it’s not ideal in terms of modern design and creates unnecessary complications should a section of railing or a lamp column ever need to be replaced, which becomes more and more likely given the bridge’s age.

So, as part of this refurbishment, the parapet and lighting are being separated and replaced with designs that meet current standards and are more efficient at doing their job. They also offer a more sensible and less disruptive approach for future maintenance.

The new design was developed to continue to minimise the visual impact of the New Bridge alongside its more elaborate neighbours, the listed Old Bridge and the Railway Bridge. It is also an opportunity to introduce consistency to the lamp columns across the New Bridge. The first section of the bridge on the Strood side belongs to Medway Council and it has a different design of lamp column to the main section over the water, which belongs to the Trust. The engineers worked with the council early in the design process so that the replacement parapets and the street lighting will be the same across the bridge.

But I haven’t seen any work happening?

We have taken a conscious decision and worked very hard in the planning to minimise lane restrictions and disruption as much as possible. The temporary road layout and safety barriers have to stay in place for the safety of the public as the parapet is removed, and for our contractor’s safety at night while the majority of activity is taking place. 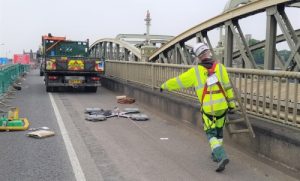