A chartered surveyor and an engineer have been chosen to fill historic roles at one of the country’s oldest charities.

Russell Cooper and Phil Filmer have been elected to be the new Senior Warden and Junior Warden of the Rochester Bridge Trust. 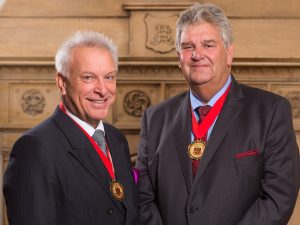 The Rochester Bridge Trust was established in the 14th century, to take on the responsibility for the maintenance and provision of crossings of the River Medway at Rochester. It is governed by the Court of Wardens and Assistants, which comprises 12 unpaid charity trustees.

Russell Cooper becomes the new Senior Warden. He was first appointed to the Trust following public advertisement in 2007, and has served as Junior Warden since 2015. He is a Fellow of the Royal Institution of Chartered Surveyors (RICS) and an Associate of the Chartered Institute of Arbitrators.

He said: “It was an honour to be appointed to the Trust ten years ago, and it gives me great pleasure to now take on the role of Senior Warden, continuing the unbroken chain of Bridge Wardens since the first one, Robert Rowe, was appointed in 1383.

“This work of the Trust has evolved and expanded over the centuries, leading to the replacement and construction of many other crossings of the Medway and the foundation of schools in the 19th century. Our primary role continues to be the provision of Rochester Bridge but we are delighted to be able to continue our other charitable work through various education initiatives and the awarding of grants.”

The Trust is now in the planning stages of a major project which will give the New Bridge an overhaul, as well as carrying out various repairs to the Old Bridge, Service Bridge and Rochester Esplanade. Upgraded street lighting will be installed throughout. This will be a complex period of works which could begin later in 2018, making the most of both Wardens’ experience of structures and engineering.

Phil Filmer is the new Junior Warden. He is an Associate Member of the Institution of British Engineers and company director of building and civil engineering firm Filmer Contracting Limited, which carries out specialist works to docks, bridges and motorways, including the M2 motorway crossing over the River Medway. A cabinet member of Medway Council, Phil has been a member of the Court of Wardens and Assistants since 2011.

The two were officially elected by a ballot of Wardens earlier this year.

To find out more about the whole Court of Wardens and Assistants see: https://rbt.org.uk/about-us/the-bridge-wardens/