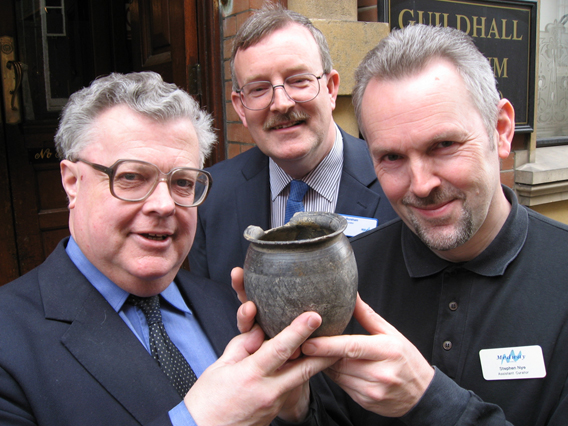 The Rochester Bridge Trust has donated a Roman jar to the Guildhall Museum, where it will be displayed for the local community to view.

Originally discovered in 1968 during construction of the New Bridge, the jar first came to light when trenches were opened for the gas mains just north of the Old Bridge. The jar was found with other Roman occupation debris about eleven feet below the present road level.

Made with fine, hard paste and polished fabric, the almost complete jar has an everted rim and lattice decoration. Archaeologists from the Kent Archaeological Society at the time dated the jar to the first half of the second century.

Placed in the nearby Bridge Chamber for safekeeping, the jar again faded from view. Forty years later in December 2008 it was rediscovered in a cupboard at the Trust’s office, and the Wardens and Assistants decided to give it to the Guildhall Museum.

Trustee Paul Oldham said, “I read about it in the Kent Archaeological Society’s 1968 journal and asked our archivist to find it. We’re delighted to have found it and to offer it to the Guildhall Museum. I look forward to seeing it displayed there.”

Assistant Curator of the Guildhall Museum Stephen Nye welcomed the offer, commenting, “We are delighted to add this item to the other Romano-British ceramics at the Guildhall Museum, particularly since it was found within the confines of Roman Rochester.”

The Trust’s wardens, who are not paid, include members of all three local Councils in the area to ensure fair representation. Since 1999 a new Charity Commission scheme has provided for twelve wardens and assistants: three nominated by the Medway Council, two by the Kent County Council, one by the Maidstone Borough Council, and six assistants drawn from the local community and appointed by the Trust.