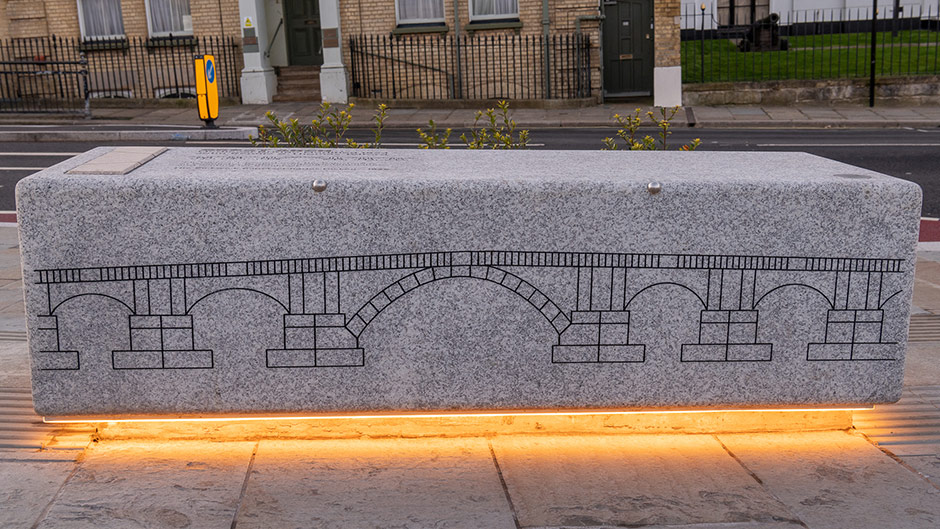 Rochester Esplanade: A place to sit and stare

During the Rochester Bridge Refurbishment Project, the portion of Rochester Esplanade that is owned by the Trust underwent significant re-landscaping to make the area more open and welcoming to visitors.

A series of nine granite benches was installed on the Esplanade, and it soon became clear that they are a hit. Friends gather, individuals sit and think, and we’re pleased to say it’s not only the staff of the Rochester Bridge Trust who have been spotted eating their lunch or enjoying a cuppa and a chat while sat on one of the benches.

Each bench also helps to tell the story of Rochester’s bridges.

Starting as you walk along the river, gradually drawing closer to the view of Rochester Bridge, the first bench you arrive at bears an outline of our medieval Bridge Chapel and Victorian Bridge Chamber. This bench highlights these two often overlooked neighbours of Rochester Castle.

Next we have a bench bearing the coat of arms of the Trust, and an explanation of the different elements it includes.

Past the parking spaces, we reach a larger area of open space, which houses the seven benches telling the story of Rochester Bridge. Each bench includes the name of the structure; the name – where known – of the responsible engineer; an outline of the elevation if viewed from the river; a sample of the material used in the bridge; and a few lines of text to help guide the visitor’s thoughts. 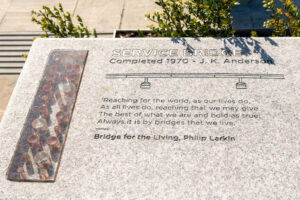 First we come to the original Rochester Bridge, constructed in Roman times, this is where the story of the bridges begins.

More than a thousand years later, we have bench number two, which introduces the medieval bridge – Rochester Bridge Trust was founded at the time of this structure’s construction. As the wording on the bench tells us, it was a notable monument. 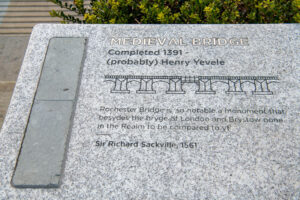 The third bench also celebrates the medieval bridge, however this time it is much changed, having been modernised by John Rennie Jnr and Thomas Telford.

The Victorian bridge – which actually still exists in parts of the Old Bridge – comes next in the line. Completed in 1856, this bears the name of the Bridge Clerk’s engineering hero.

Next we have the most recognisable of the three present day bridges, the Old Bridge. The verse here picks out a detail from the bridge, hopefully inspiring readers to think more about the shape of this iconic structure. 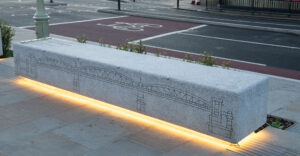 Alongside this is a smaller bench for the Service Bridge, which is often overlooked and was completed at the same time as its other neighbour and the subject of the final bench, in 1970.

At the “top” of Rochester Esplanade, near the end of the Old Bridge, we complete the set with the New Bridge.