Dr James M. Gibson, who died at the age of 70, packed much into his 42-year career. He started out as an academic, carried out much important original research, and went on to become an accomplished historian and archivist for some of the oldest organisations in his adopted home county of Kent.

I first met Jim 12 years ago when I joined the Rochester Bridge Trust as the first female bridge clerk in the ancient charity’s 600-year history. He had already been with the Trust for more than 18 years and could not have been more welcoming and supportive in his usual gentle, generous and humorous way. Over the next decade, as other staff retired and moved on, with no deliberate plan the new staff joining us all happened to be women. Jim often joked that this was a conscious policy on my part to feminise the Trust and leave him as “the last man standing” as far as the office team was concerned. Although I never heard him say it out loud, I think he quite enjoyed being part of an organisation full of bright, well-educated and challenging women who also tried to take care of him more than his former male colleagues had done. That said, at social gatherings, it was Jim’s very special carrot cake that everyone looked forward to (he made a pretty delicious chocolate brownie too). Jim was also pleased when Andrew Freeman joined the Trust last August and he was no longer thoroughly outnumbered in the office.

Jim obtained a B.A. in 1970 from Houghton College in Western New York; an M.A. in 1974 and Ph.D. in 1976 from the University of Pennsylvania. He lectured in English literature and writing at Houghton College, before coming to Kent on a short sabbatical in 1984 to begin editing the Kent volumes for the international research project Records of Early English Drama.

People meeting Jim for the first time were surprised by his accent – marking him out as neither Kentish man nor man-of-Kent. Often he was presumed to be Canadian. When asked from where he had originated he would respond “I was born in Aberdeen”. Pausing for a moment, with a twinkle in his eye, he would wait for the listener to be about to ask more and then interject “Aberdeen, South Dakota!”

Having decided to settle permanently in Kent, UK, he began working as part-time archivist in 1987 for the Rochester Bridge Trust, where he has catalogued the bridge archive, created many exhibitions, helped write and edit the bridge history, Traffic and Politics, and, with the help of his daughter Rosie, designed the Trust’s first website. 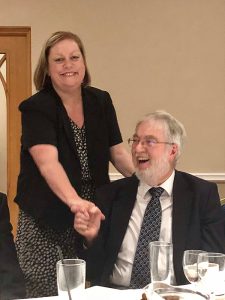 Jim always had a research project on the go and I was flattered that he often asked me to help with aspects of the research, both related to the Trust and his other projects – we had many fascinating discussions on different possible interpretations of a particular document or translation of a particular section of Latin or early English text. I was pleased to support him with the heraldic and genealogical research for several of his projects – spending many evenings hunting for the obscure relatives of Richard Watts in particular. One of my memories of Jim will be of those enjoyable hours emailing back and forth with fragments of information one of us had found – questioning, challenging, discussing.

An achievement of which Jim was particularly proud was the City and Region Project. Led by Dr David Ormrod of the University of Kent, this examined historic rents in London and the South East. The estate records in the Rochester Bridge Trust archive were analysed taking the raw data from account books and leases and then all the estate maps and building plans were digitised. All this work is available on the Trust’s website and has made these complex records accessible to all, forever.

The Trust’s latest exhibition, Bridge Works: A Story of Rochester Bridge, has been a great success and we are delighted that Rochester Cathedral has now agreed it can remain on display there until October. Jim was a key member of the team which designed and delivered this important exhibition, selecting and preparing documents from our archives, many of which have never before been on public display. We all feel that the exhibition succeeds in communicating complex, often arcane documents in a way that tells a story about the past accurately yet in a way which is accessible to all. We could not have achieved this objective without Jim’s passion and skill.

Serious historians can have dry personalities – not so Jim. He was always laughing – loud, sudden, startling guffaws which could be heard throughout the building. He played gentle tricks – adding a line or a squiggle to Jane’s shorthand and delighting in watching her trying in vain to transcribe her own notes. His dry humour was ever-present. His desk always appeared a chaotic mess to me, but he always maintained that he knew exactly where everything was. When I suggested he tidy it up and pointed out my clear desk he would say “If a cluttered desk is the sign of a cluttered mind, what is an empty desk the sign of?” I could not help but smile and he never did tidy up his desk.

Jim’s 30th anniversary at the Trust fell last October. We organised a celebration supper which was attended by the Wardens of Rochester Bridge and nearly all the staff he had worked with, past and present. It was a lovely evening full of warm memories and much laughter. The photographs of that occasion are delightful and they sum up the affection felt for Jim by all his colleagues. My favourite photograph shows him holding my hand as we share a joke and I will treasure it always in the memory of my dear, dear friend.

In 2014 to coincide with the Old Bridge’s centenary, Jim was interviewed by ITV Meridian, you can see the news feature here. A year later, a more general feature on the Trust’s 600-year-old archive also saw Jim in the spotlight.