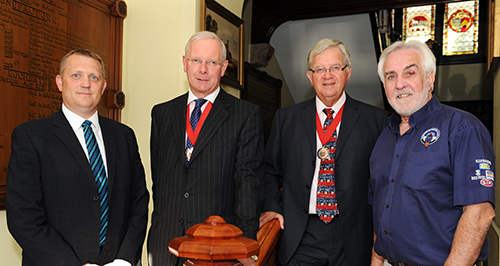 Maidstone Students Get Fired Up on Science

Pupils from eight Maidstone secondary schools will soon be trying their hands at anything from making gunpowder to building a racing car and beekeeping as part of a two-year science programme.

The Growing Scientist Project is being sponsored by the Rochester Bridge Trust and aims to engage up to 1,000 pupils a year in science, technology, engineering and mathematics. Its longer term objective is to encourage further study and future careers in these subjects.

The £60,000 grant from the Rochester Bridge Trust will fund a programme of events during 2011 and 2012, starting with a Space Day this autumn when the students will be designing and firing rockets as well as talking via a video link with people who can tell them from first hand experience about the challenges of living in space. The schools will also be teaming up with each other to develop their own projects.

The Trust, one of the oldest charities in the country, has been providing bridges across the River Medway at Rochester at no cost to the public since the end of the 14th century. It has helped fund other crossings along the river, as well as endowing schools in Maidstone and Rochester and supporting Kent community groups and charities.

“An expert understanding of science and engineering has been crucial to the work of the Trust and will continue to be so,” said Senior Warden Russell Race. “We are pleased to be supporting a project that will help develop the next generation of scientists.”

The project’s first year will culminate in a large exhibition at the Historic Dockyard at Chatham, where the achievements of the schools will displayed alongside science and engineering exhibits from the worlds of industry and education.

The 2011/2012 Growing Scientist Project was formally launched with a dinner for teachers, academics and industry representatives at the Trust’s historic buildings in Rochester.

“We seek to enthuse young students about the practical application of science so that they choose science subjects at key stages in their education and then go on to follow it in their careers,” said project manager Ed Seymour, from Maidstone Grammar School. He also explained that the Trust’s grant had breathed new life into a programme that had originally started in 2008 but was set to finish because of funding cutbacks.

The dinner also heard from guest speaker Dave Rowley, Education Programme Director for Bloodhound SSC, an initiative that aims to promote engineering and science by developing a car that can travel at 1,000kmh – faster than sound and quicker than a speeding bullet – and retain the World Land Speed Record for the United Kingdom.