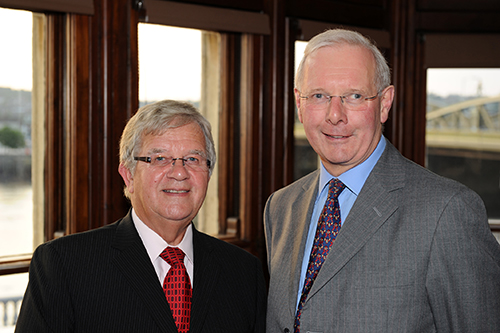 The role of Bridge Warden dates back to the 14th century and carries with it the responsibility for maintaining a crossing over the river Medway at Rochester at no cost to the public.

Russell Race, a retired stockbroker who lives in Rochester and has also recently been appointed chairman of the trustees of his old school, said: “I am honoured to be taking on the position of Senior Warden and to be following in the footsteps of so many distinguished predecessors who have helped ensure that the Trust has carried out its work for more than 600 years.

“As well as maintaining a crossing at Rochester, the Trust has contributed to the construction and maintenance of other bridges on the Medway. It also provides grants to local charities and has played an important role in the education of young people.

“The Trust, for example, was instrumental in setting up the Maidstone Girls Grammar School in 1887 and the Rochester Grammar School in 1888. The Trust also gave large endowments in the late 19th century to the Maidstone Grammar School and to my old school, the Sir Joseph Williamson Mathematical School. More recently we gave £2,500,000 to the University of Kent to establish the Bridge Wardens College on the Medway Campus and £250,000 to the University of Greenwich to fund a Professorship of Bridge and Tunnel Engineering.”

Russell Race, who was formerly Junior Warden, succeeds Dr Anne Logan, a lecturer in Social History at the University of Kent.

New Junior Warden Tony Goulden is well used to being in the public eye, having been the original guitarist in the rock group Vanity Fare before joining BAE Systems as an avionics technician. More recently he has been active in local politics both as member of the Labour Group and then as an independent.