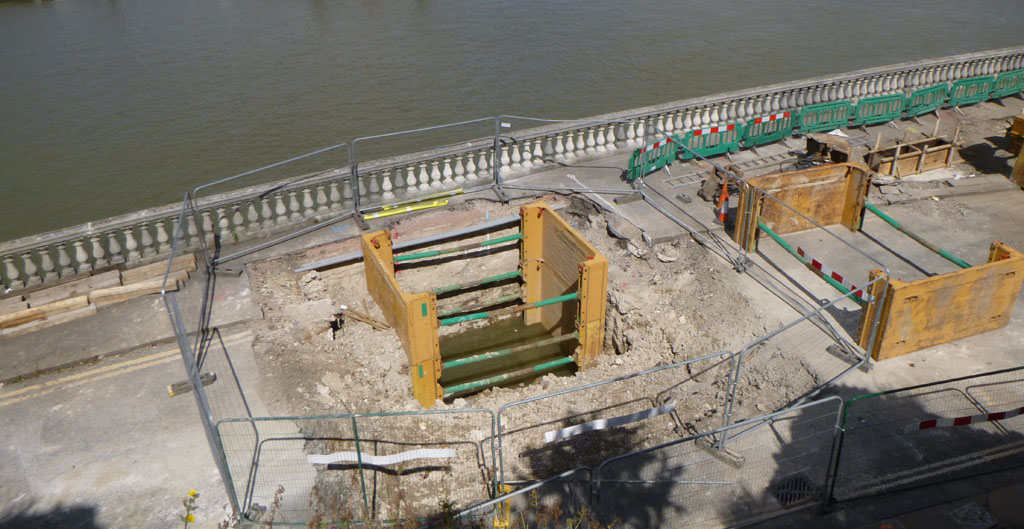 Why there’s a big hole in Rochester Esplanade

We appreciate your patience while the end of Rochester Esplanade is closed to road users.

The closure of the junction with Corporation Street is required to allow the Old Bridge traffic to run uninterrupted by turning traffic while there is only one lane available on the bridge. Unfortunately the closure was not being observed by drivers, which was creating an unsafe situation, and so the Esplanade had to be closed completely – earlier than originally planned – at the request of Kent Police and Medway Council. Our contractor has therefore brought forward the work to the Esplanade itself to make full use of this traffic-free period.

We thought it would be useful for us to explain the major work that needs to be done on the Esplanade.

Rochester Esplanade as we know it today is a relatively new construction, having been built by the Victorians. Before that work in 1857-8, the edge of the river was largely just a marshy bank up to the Castle Wall to the south of the old medieval bridge.

As we explained in this blog, the Esplanade roadway was created with rubble from the demolished medieval bridge. This use of roughly cut stones and loose material has gradually led to issues which needed to be addressed. Within that post we also mention an underground spring, and the need to manage the water from that spring is the reason for the large hole we’ve now dug.

This spring naturally rises up from the layer of chalk deep below the Esplanade and the fresh water finds its way into the river by passing underneath the river wall. As it flows, the spring gradually washes away the smallest particles of the rubble of the Esplanade’s foundations which then causes the road surface layers to settle. For a long time the Trust has repeatedly filled the resulting dip which appears in the surface of the footway and the road.

As we said before, the subsidence is gradual and not dangerous but it is a nuisance because, over the years, lane closures and disruptive works have been required to smooth the area out. However it is time to address the issue once and for all by installing a culvert which will connect the natural spring directly to the river and stop the flow under the river wall which causes the problematic erosion and subsidence.

So what is a culvert?

In this case, the culvert is a large pipe. It has to be large and strong enough to carry the layers of material above it, as well as the river wall and the weight of traffic passing. The pipe will be perforated so that water can pass easily into it from the surrounding ground.

To install the culvert we begin by digging a large hole. An archaeologist will be on site throughout; given how close the excavation is to the Castle Wall.  The bottom of the hole is then filled with “no fines” concrete, which looks a bit like Swiss cheese – it has lots of holes – and acts as an artificial sponge placed on top of the natural sponge of the chalk ground.

Then we will lay the culvert and cover it with more no fines concrete. As water naturally takes the path of least resistance it will flow into the pipe and out through the river wall, where the opening will be covered by a flap. This means the water can flow out of the pipe but the river water cannot flow in.

This will take some time to complete. The hole will be approximately 6m deep, and during construction it will constantly fill with water as the tide rises. The workforce will not work in the hole while the level of the tide is above them and the water needs to be pumped out in a safe, controlled manner to ensure the safety of all involved.

Because of the need to work only at low tide when it is safe, there will be times when it looks like no work is being carried out. Once the concrete is pumped into the hole it also needs time to cure and to harden. The current estimate is for this work to be completed towards the end of the summer, but this does rely on good weather and no unexpected discoveries during the excavation period.

Once the culvert work is complete, all the drainage pipes under the Esplanade will be renewed and the surface rebuilt.

We apologise for the inconvenience, and hope that now you have an understanding of what the work is and why it needs to be done, it will make the closure less frustrating.

These images show the large machinery that is used to dig the hole and install the yellow barriers that prevent the hole from collapsing. Also pictured is the pump used to remove water from the hole before work can begin on each shift.