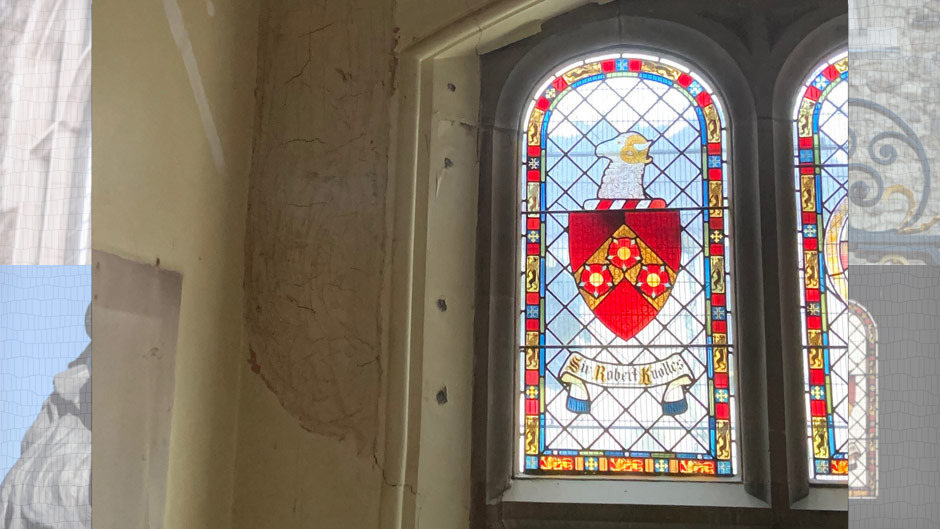 When the Bridge Chamber was built in 1879, traditional lime plaster was used to cover some internal masonry walls and to provide the lath and plaster ceilings. Bob Dollin, who acted as Project Manager on behalf of the Rochester Bridge Trust, explains what this is and why it’s significant.

Lime plaster is a traditional plaster that has been used for covering internal walls and ceilings for thousands of years. It generally comprises a mix of traditional lime, sand and water, and may also contain animal hair to give it strength. The lime is produced from limestone that has been baked in kilns at a high temperature to remove gases and impurities.

Nowadays lime plaster is less common, its use having diminished from the early 1900s, when gypsum and other lightweight plasters that were cheaper, easier to apply and quicker drying became more readily available – lime plastering is a slow process.

After being applied, the hydrated lime plaster ‘cures’ wherein it doesn’t dry out but sets very slowly by carbonation (absorbing carbon dioxide) and completes the lime cycle on its surface. One major benefit of lime plaster, particularly in older buildings with solid walls, is that lime plaster is a breathable material that allows moisture from the substate to escape though it and evaporate.

As the Bridge Chamber is Grade II-listed, during its internal refurbishment traditional materials and processes were used wherever possible, including lime plaster. This was used on areas of wall and ceiling where the original lime plaster had to be removed and replaced, for instance to repair damaged patches or in alteration works.

It was a slow process that took place alongside other works around the building but it was worth the effort to look after the building.

Lime plaster is applied in thin layers or coats, with a three-coat system the traditional method. First, a scratch coat is applied to the substrate, which could be a bare masonry surface or timber laths. This coat is made of coarse aggregate to create a rough surface that is then heavily scratched to provide a good key for the following coat to adhere. Second, a float (or brown) coat is applied, the surface of which is ruled to a relatively flat finish and lightly scratched to provide a key for the final coat. The third or finish coat is made using a finer aggregate to produce a smooth, flat finish that can be decorated.

Generally, the total overall thickness of the three coats is about 25mm, with the thickness of each coat not exceeding 15mm. Lime plaster is heavy, and cures slowly compared with modern plasters, and sufficient time (this can be as long as 10 days) must be allowed between the application of each coat, especially where the site conditions are cold and/or damp, and before any subsequent decorations are applied.

Here is a selection of photos from different stages within the Bridge Chamber.