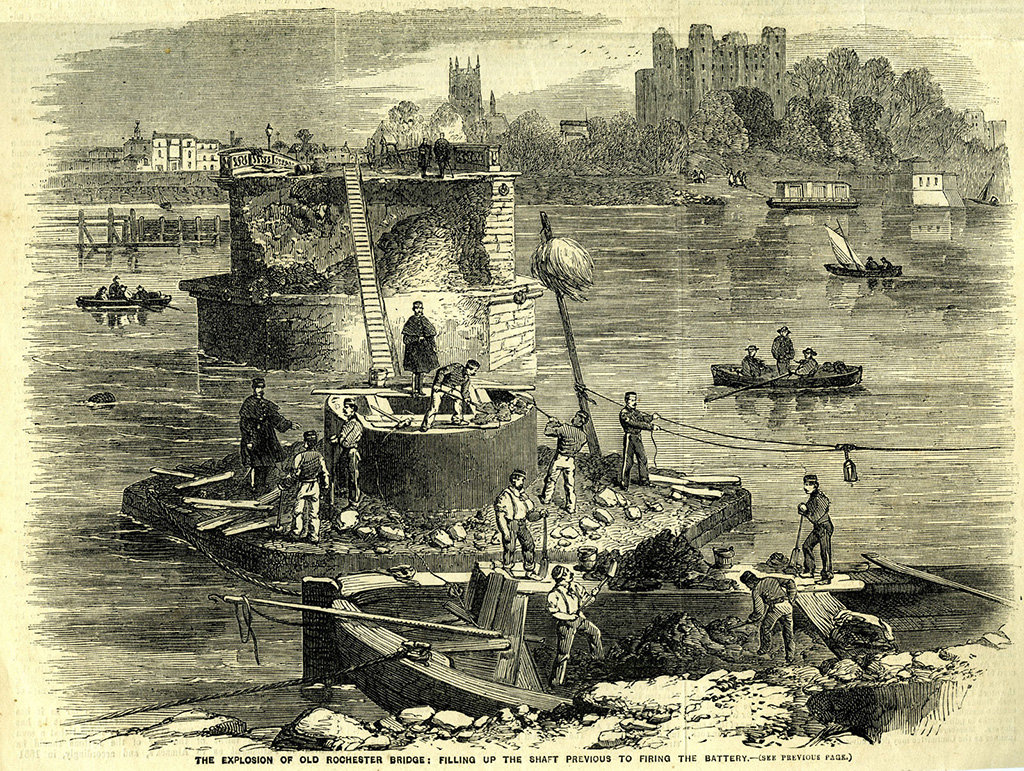 How do you demolish a medieval bridge?

The medieval bridge stood for 500 years, until the cost of maintenance and the increased road and river traffic led to its eventual replacement in 1856 by the Victorian crossing.

A 465-year-old stone arch structure, the medieval bridge rested on huge protective platforms called starlings, consisting of hundreds of piles driven into the riverbed. It would have been a long, difficult job to take down, but an unexpected offer of help came from the Royal Engineers.

Bridge Engineer Sir William Cubitt notified the Bridge Wardens of the request: “…an application made by the Officer commanding the Royal Engineers at Chatham to be allowed to try some experiments under Water in the removal of the Foundations.”

You can read more about the events leading up the demolition of the bridge and the difficulties of the task in The Explosive Case of Colonel Sandham and the Demolition of Rochester Bridge, which is free to download here.

Alternatively, here’s an extract from the Illustrated Times on 24th January, 1857: 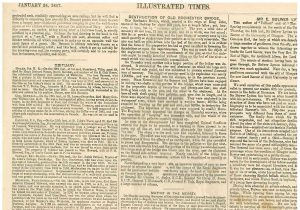 Old Rochester Bridge… has at length fallen; not, however, by time, but by ‘villainous saltpetre’. The pier, a solid mass of masonry 45 feet long, 21 feet in depth, and 13 in width, was first mined; 300 lbs of powder were fired, and the huge blocks of masonry were by this small quantity so shaken from their position as to be easily removable. The pier was built on piles driven into the bed of the river, and it is evident that the force of the gunpowder has had as great an effect in loosening the foundations as upon the superstructure. This was as much the object of the engineers as to loosen the constituents of the pier, so that the materials might be readily detached without filling up the bed of the river – a result which was most successfully accomplished. 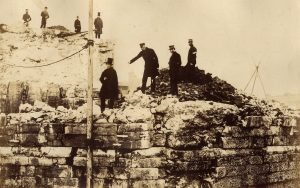 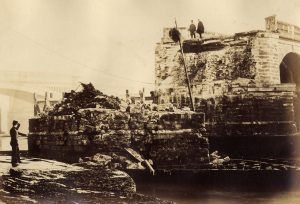 On Thursday week another and a larger portion of the bridge was destroyed. It consisted of the pier and abutment on which the large arch on the Strood side rested, and was calculated to contain several thousand tons of masonry. The weight of powder used in the explosions was nearly 1,000lbs., and was divided into six charges, as in the previous experiments. Since November last the Sappers and Miners have been engaged in sinking two shafts in this portion of the bridge, which were excavated to the respective depths of twenty-four and twenty-one feet; one shaft having been sunk in the pier, and the other in the abutment. At the base of each shaft sprang two galleries, each nine feet in length, and in these were deposited the charges of powder. They were contained in tin waterproof cases, which were enclosed in wooden boxes; 500lbs. being required for blowing up the pier, and arch, and 300 lbs. in destroying the abutment. The keystones of the arch were removed by smaller blasts. 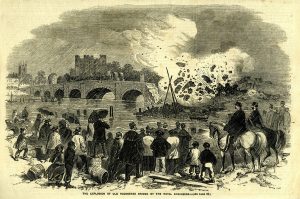