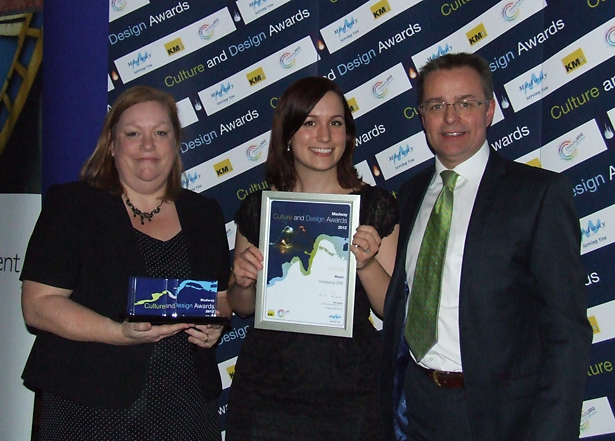 Orchestra ONE (Orchestra of New Experiences), funded by the Rochester Bridge Trust, has won the Music Award in the Medway Culture and Design Awards 2012.

Organised by music education charities Kent Music and Rhythmix, Orchestra ONE offers 12 – 19 year olds from all musical backgrounds the chance to work together to create and perform their own compositions.

Sue Threader, the Trust’s Bridge Clerk, attended the awards event hosted by Medway Council. She said: “We were pleased to support the development of Orchestra ONE for two years as it specifically aimed to provide opportunities for local young music enthusiasts who rarely have a chance to take part in music-making activities with other people.”

Peter Bolton, chief executive of Kent Music, said: “This is a new kind of music education project designed to explore different approaches to teaching, as well as the way that young people are encouraged to be creative and musical. We are delighted that all the inspiration, creativity and hard work put in by both young musicians and music educators has been recognised with this award.”

Funded by the Rochester Bridge Trust, Orchestra ONE has run four projects, consisting of ten weekly workshop sessions in Rochester, Maidstone and Tonbridge, with each project culminating in a concert led by a musical director. These have included Tim Steiner, Matt Wright and Peter Wareham. Each project has aimed to create music inspired by the River Medway and its journey through Kent.

The fourth Orchestra ONE project concert, with musical director James Redwood, is being held at the New Line Learning Academy, Maidstone, on Sunday December 16. The concert starts at 4pm and is followed by an after show party featuring an interlude by the Kent Youth Singers.

Concert tickets are available free in advance by contacting Kent Music on 01622 358406.