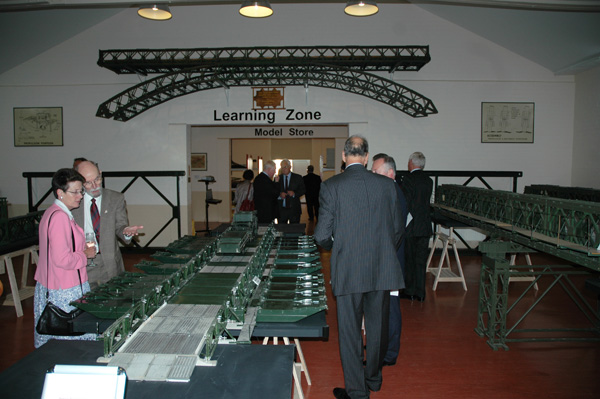 The Brompton Bridge Study Centre has now opened its doors to engineers and bridge enthusiasts at the Royal Engineers Museum.

Development of the study centre and bridge model gallery, which cost more than £200,000, was supported with grants from the Rochester Bridge Trust of £10,000 in 2007 and £15,000 in 2009. The charity’s Bridge Clerk, Sue Threader, attended the official opening, along with trustees John Spence, Paul Oldham, and Russell Cooper.

More than 60 bridge models are on display – including a Bailey Bridge kit used to train Sappers during WWII before they went to Europe and a model used to design the new bridge at Fort Amherst as part of its Heritage Park. A new museum Bridge Store contains many further models, which can be accessed on request.

The museum has spent three years converting a former stable block, assembling and cataloguing artefacts, and fundraising ready for its opening – part of the 200th Anniversary celebrations of the Royal School of Military Engineering in Brompton.

Mrs Threader said: “Since the Rochester Bridge Trust is a charity founded in the late 14th century dedicated to providing a bridge over the River Medway at no cost to the public in perpetuity, raising awareness of bridge engineering excellence is very close to our hearts.

“The Trust has been delighted to support the Royal Engineers with this project which is a tremendous resource for today’s bridge builders as well as for young people who are studying to be our engineers of the future.”

The Rochester Bridge Trust also sponsors an annual bridge building competition at the museum for teams of primary school design and technology enthusiasts.