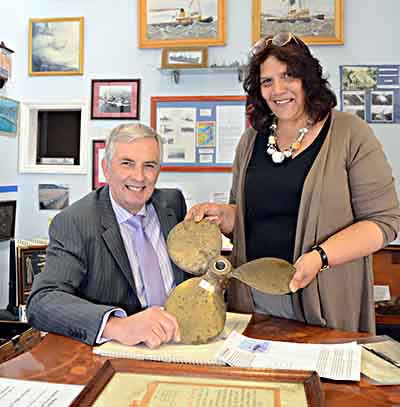 Young people in Sheppey will be able to take a hands-on approach to discovering their heritage and their history, thanks to a grant from the Rochester Bridge Trust.

The Trust, one of the oldest charities in the country, is helping to furnish a new education area at the popular Blue Town Heritage Centre in Sheerness.

The Trust, which has been providing bridges across the River Medway at Rochester at no cost to the public since the end of the 14th century, regularly makes community grants to Kent and Medway organisations helping to conserve or study the county’s history.

The funds to maintain and build bridges as well as supporting local projects are the result of careful investment and management of the Trust’s original endowments. For many centuries the Trust owned land on the Isle of Sheppey and income from farming on the island contributed to the cost of maintaining Rochester Bridge.

“The Heritage Centre is an evolving project providing a community and entertainment centre alongside a celebration of Sheppey’s history, its heritage and the working lives of local people,” said Mrs Hurkett.

“The grant from Rochester Bridge Trust will enable us to invite pupils and teachers from local schools to explore the history of the island and its ecology in a bespoke education area above the former Victorian theatre.”

The Heritage Centre is a registered charity and an all-consuming passion for Mrs Hurkett and a 15-strong team of volunteers.

“The hotel and theatre were bombed in the First World War and have been used for different businesses, including engineering and boat building, over the years. Initially we bought the 200-year-old building for a kitchen and bathroom company but heritage has taken over.

“It all started when we agreed to use the company showroom to screen a black and white film about Sheppey. We expected a handful of visitors and more than 100 came along.

“I discovered that there was no single source of information about the history of Sheppey, the people who have worked here and the industries that have supported them let alone our incredible natural environment.

“The former showroom is now a “living museum” featuring displays and objects capturing the spirit of Sheppey. We have space for meetings and entertainment, including the island’s only cinema, and we are working with the University of Greenwich, the University of Kent and the University of Southampton on research projects into life on Sheppey.

“We have become a key attraction for visitors, as well as local residents, and we run regular guided trips to show off our island.

“We are hoping to restore the Victorian music hall theatre to its original splendour – making it the only example of its kind outside of London. We have some photographs, plans and some of the promotional material from its heyday, which will give us a good starting point.”

1. The Rochester Bridge Trust was founded in 1399 and is the only surviving independent bridge trust that still serves its original purpose. The Trust owns and maintains the road and service bridges over the River Medway at Rochester and has contributed to the cost of many other Medway crossings over the centuries. It also makes charitable grants and supports other charitable and educational projects in Kent.

2. The Trust’s income derives from 14th- and 15th-century endowments, and assets are carefully managed to provide funds for bridge maintenance and future replacement as well as for charitable activities. It provides its services entirely free to the public. The Trust receives no external funding and is regulated by the Charity Commission.