Remains and Reminders of Waterloo Bridge

It’s fairly common knowledge that the fascia of the previous London Bridge, conceived by Rennie but with detail design and construction by his son, Sir John Rennie, had been shipped off to the States in the 1970s. The urban myth, which has absolutely no foundation in fact, that the buyers somehow believed they were buying part of another bridge persists. But the Rennies’ London Bridge is not the only bridge by John Rennie which no longer exists as a structure but which has left remnants through re-use of its details.

John Rennie’s Waterloo Bridge was closed in 1934 and demolished by 1936 but remnants can still be found in a variety of unlikely places.

The bulk of the dismantled stone (60,000 tons) was taken to Morgan’s stonemason’s yard in Harmondsworth, Middlesex for storage while London County Council looked for a buyer. The stone was piled up into 12 huge heaps each 50-60 feet high. The storage costs mounted up quickly and the Council, unable to find a buyer for the lot, sold it to Morgan at a discounted price. The stonemasons cut much of the stone into smaller units and started selling the good quality stone piecemeal.

Purchasers paid around forty shillings per cubic yard and most of it was dispersed to contractors needing stone for the facings of walls and bridges, office blocks and private homes. Some was used for gravestones, paving slabs and boundary walls such as that around the cemetery at St Mary Cray in south east London.

A large quantity was purchased for new and repaired bridges over the River Wye between Ross and Monmouth, and more was sent to Scotland at the rate of 200 tons a week for nearly 20 years for use in the building of railway viaducts between Edinburgh and Glasgow.

Some stones were offered overseas with the aim of furthering links to the British Commonwealth of Nations according to an article in the Aberdeen Press and Journal (22 Aug 1934). Various pieces can be found in New Zealand in the form of a memorial and drinking fountain for dogs; the surround to the viewing platform at Mount Victoria; a memorial to a former Prime Minister and a sundial pedestal. Pieces also survive in

Canberra, Australia beneath the Commonwealth Avenue Bridge. In 1945 some of the the remaining stone was shipped to the Netherlands to help repair bridges destroyed during the Second World War.

Some of the architectural features were more carefully preserved and labelled as part of the bridge.

Two of the lamps were salvaged and erected on another of Rennie’s masterpieces at Kelso Bridge where they can still be seen today.

The Institution of Civil Engineers has the decorative keystone of the bridge which was presented to the institution by engineers Rendell Palmer & Tritton during the demolition. A section of the balustrade is at the ICE Benefit Fund home at Haywards Heath. 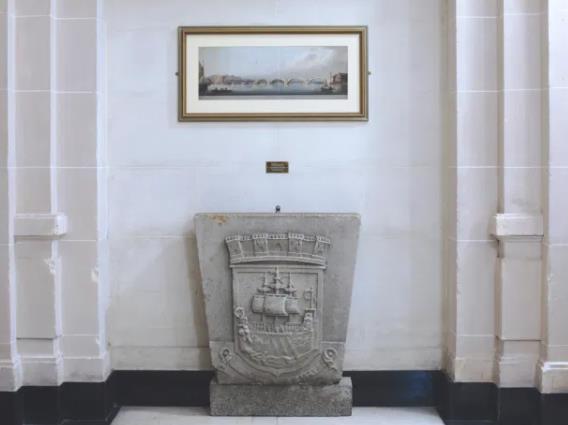 Disposing of the granite balusters, of which there were 1,296 in total, was a significant challenge. A very small number were left in place and can still be seen beneath the northern end of Waterloo Bridge, but most of the rest were recognised as ideal for recycling into stands for sundials and bird baths.

Some of them were marked and placed in public spaces, such as Antrim Park in Belsize Park There is one incorporated into the Rennie Memorial at East Linton and another in the garden of Phantassie House, Rennie’s birthplace and childhood home. One was sent to Aberdeen Town Hall, as a gesture of thanks for supplying the granite in the first place and another to the first National Trust property at Alfriston Clergy House. 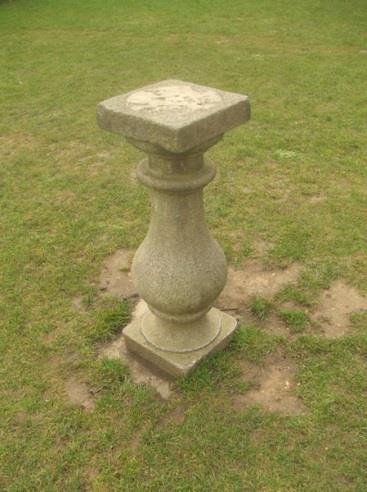 Pedestals from the balustrade of the former Waterloo Bridge, today found at Belsize Park in London and the Rennie memorial at his birthplace at Phantassie, East Linton

The majority of the balusters ended up in private homes since anyone could ask at the demolition site and take one home for £1. Many no doubt still survive in obscurity, hidden in private gardens, supporting birdbaths and sundials. 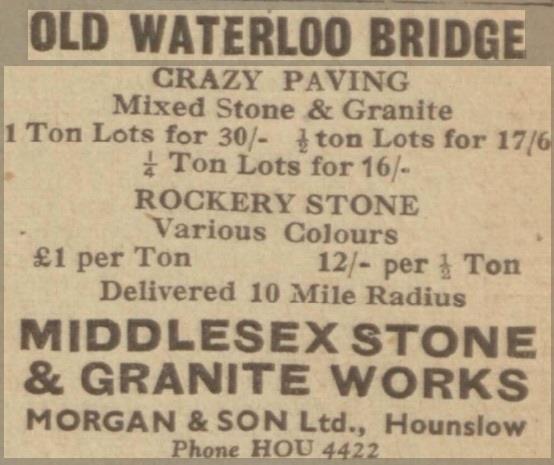 At Harmondsworth Moor (Colne Valley Park) in Hillingdon/near Rickmansworth there is a memorial constructed from Waterloo granite stones to a Royal Canadian Airforce Halifax bomber which crashed 16 September 1943 on return from a mission, with the loss of all seven crew members. The site includes an art installation using further stones, known as the Giant’s Teeth. 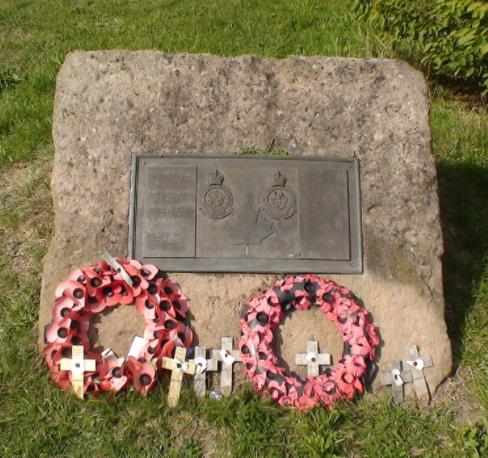 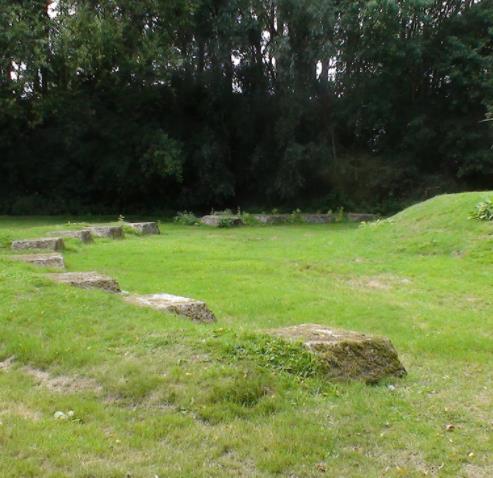 A bronze bust of Winston Churchill in Wanstead, commissioned for the conservative association where Churchill served as MP from 1924 to 1964, is mounted on a plinth made from a large piece of stone from Waterloo Bridge. 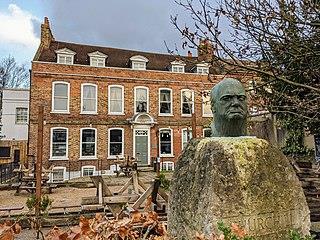 From 1970 most of the remaining stone was crushed for aggregate when the stonemasons’ yard was redeveloped.