The estuary of the Water of Leith has offered shelter to shipping at all periods of the past. Quay walls were erected along the banks of the water of Leith to accommodate shipping. Leith’s geographical position offered the shortest and most direct route to the Baltic from Scotland.

The tidal range of the estuary had allowed vessels to enter the river mouth at high tide but at low tide they keeled over on the muddy bottom. One of the great drawbacks of Leith as a port was the sand bar across the mouth of the river. The weather conditions and the influence of winds and tide caused the bar to rise and fall in height and to move across the channel. This could mean that access to the port could be impossible for days at a time.

In 1799 John Rennie was commissioned to examine the ground and furnish designs for docks and extended piers for the growing trade. He recommended the construction, on the west side of the river, of three wet docks: East Dock, West Dock and a third larger dock which would have reached deep water at Newhaven. The East Dock was constructed between 1801 and 1806 and the West Dock between 1810 and 1817. The two docks were parallel and of the same size. The purpose of the docks was to ensure a constant water level for shipping. They could accommodate up to 50 vessels of the day, which were sailing ships. The third dock was never built. He also recommended the construction of an east pier across the sands to block the progress of the bar and maintain deep water access to the new docks.

The docks were accessed from the river by an entrance lock 145ft long by 34ft wide and 23ft deep with timber lock gates slightly curved in plan and operated by a chain and winch system. The lock is similar to the entrance from the Thames to London docks which was designed by Rennie at about the same date. The lock gates are visible today. When built there was a timber turn bridge over the lock. This was replaced in 1853 by the present iron swivel bridge which originally spanned the link between the two docks. This bridge although probably slightly modified when moved to its present position is a survivor of an iron swivel bridge to the template devised by John Rennie and his associate Ralph Walker. These bridges were also installed in the docks in London and Hull in the early 1800s1. Hand-operated winches and capstans were used to raise pivoted sections of the arch members which then allowed the two halves of the bridge to rotate in plan, each side rotating anticlockwise into semi-circular recesses in the quay side to allow unimpeded passage of ships through the lock. 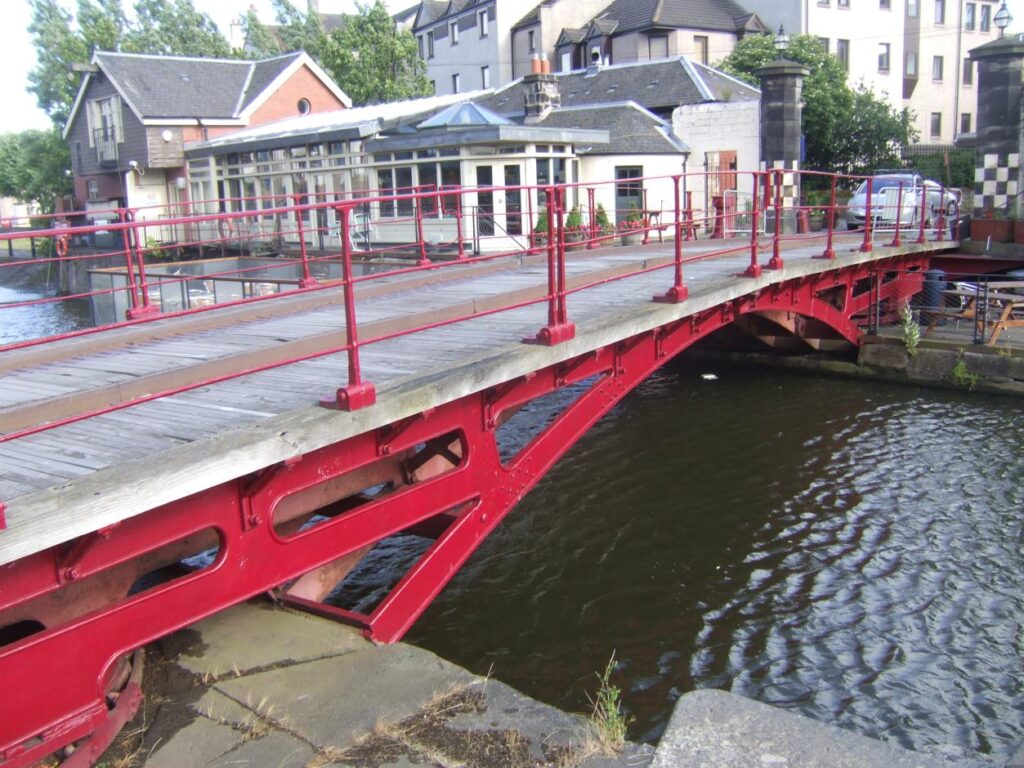 One of the results of the shifting of shipping activity across the river was the abandonment of the Tolbooth in South Leith and the building of a new Customs House designed by Robert Reid on the left Bank in North Leith in 1812.

Over the years several more wet docks -Victoria Dock, Albert Dock, Edinburgh Dock and Imperial Dock- were constructed with wider entrances, and the east pier was extended several times to deal with the ever-expanding trade. The construction of the Albert and Edinburgh Docks made it necessary to have an efficient means of communication between the east and west sides of the harbour. This was effected by the construction of the hydraulic Victoria Swing bridge between 1871 & 1874.

The entrance dock and swivel bridge survive (fixed respectively open and shut to the tide) but what became known as the Old East and West Docks have been infilled and are now car parks. Some of the stones forming the edges of the docks can still be seen as well as the occasional mooring ring or bollard. The Scottish Government office “Victoria Quay”, which opened in 1996, was built to overlook Victoria Dock and thus overlies the north quays of Old East and West Docks, giving impetus to the redevelopment of the non-port parts of the Port of Leith.