John Rennie (1761-1821) was one of the most important engineers working in the UK in the late eighteenth and early nineteenth century. His fame arises from the scale and quality of the engineering works he constructed.

Rennie was a contemporary of Tomas Telford and the span of his professional career links the time of first consulting civil engineer John Smeaton, (“Father of Civil Engineering”) with the start of the railway age represented by engineers such as Isambard Kingdom Brunel and the Stephensons. Rennie is also significant because he was the first UK engineer to gain an engineering education at university.

John Rennie was lucky. He was born with great natural ability but also at the right time and in the right place. He grew up in Phantassie near East Linton, about twenty miles east of Edinburgh and was born during a period known as the Scottish Enlightenment, a period when scientific, medical and economic thinking, and a love of education, were flourishing in Scottish Society and in Scotland’s universities. The focus on reason was accompanied by an emphasis on improvement, virtue, and practical benefit for the individual and society as a whole. 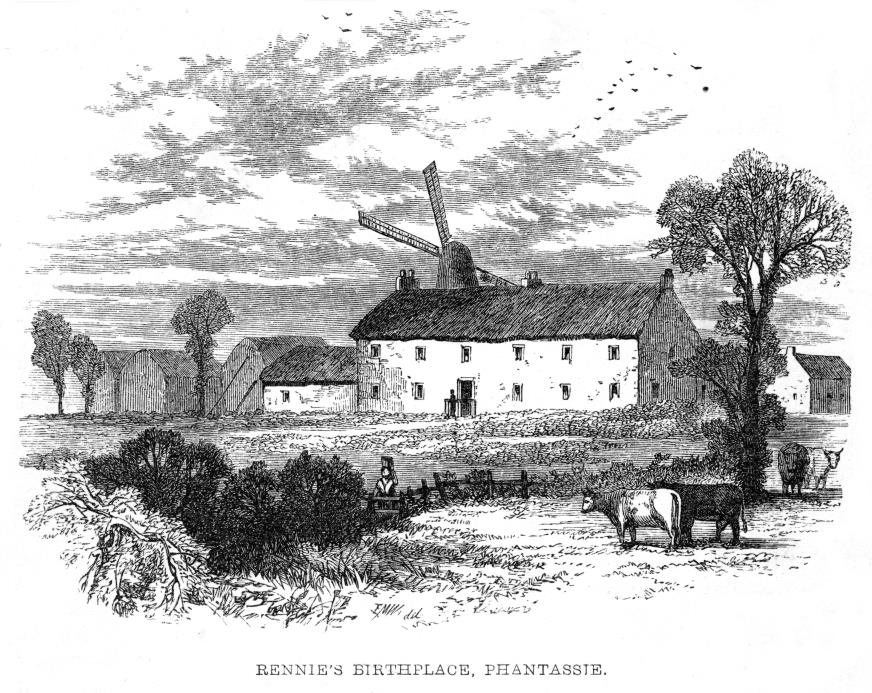 The precise location of Rennie’s birth was particularly favourable because Andrew Meikle had his workshop at Houston Mill on the Rennie family’s lands. Meikle was descended from a line of renowned millwrights and he sometimes described himself as an engineer. He is remembered particularly as the designer of one of the earliest threshing machines and of other agricultural equipment. Accounts of John Rennie’s early life say that as a child he spent a lot of time in Meikle’s workshop and that he made remarkable models of water mills and other devices when he was still attending the parish school.

Rennie left the parish school when he was twelve and went to work for Meikle as an apprentice. After two years he decided to continue his formal education and went to the local high school at Dunbar. Here Rennie studied more advanced mathematics and clearly excelled. By coincidence a visitor to the school at the time made particular mention of Rennie in his report. Within two years of arriving at the school in Dunbar the mathematics master of the school, who was moving to another position, was sufficiently satisfied with Rennie’s ability to recommend that he take over as mathematics master. However, Rennie had by then decided to pursue a career as millwright and returned to Phantassie. Over the next two years he continued his technical education through self-study and by working with his old master, Meikle. He also started to undertake projects acting independently. Thus by 1780, when he began to attend Edinburgh University, he was working millwright and able to pay for his own tuition by working during the vacations.

In 1780 the University of Edinburgh was one of the best UK institutions at which to study mechanics and other technical subjects. At the time no English-speaking universities had engineering schools or engineering degrees but at Edinburgh Rennie encountered two significant technical influences, Joseph Black, who was professor of Chemistry and John Robison, Professor of Natural Philosophy, who lectured on mechanics, hydrodynamics, astronomy, optics and electricity and magnetism. Robison knew James Watt and later arranged an introduction for Rennie that led to Watt employing him. Robison’s writings tell us that he was well acquainted with the state-of-the-art in engineering on the continent at this time. Thus by the time Rennie had left the University of Edinburgh he had received an ideal education for pursuing a career as an engineer. His training with Meikle and experience as a millwright had given him the practical skills and knowledge of materials that are difficult to learn from books. Furthermore, he had worked with Meikle during his master’s development of the threshing machine giving him invaluable experience on novel projects. This was then capped by theoretical instruction in mechanics and other relevant technologies.

Rennie continued to correspond with John Robison long after he had left university. In 1793 Robison was commissioned to write articles on Mechanics for the Encyclopaedia Britannica. Robison arranged to visit Rennie “that he might extract as much information from him as possible” on the subjects of the theory of arches, roof construction, carpentry and hydrodynamics and river flow. Robinson’s article on roof construction presents an early description of the use of graphic statics for roof design. This shows how Rennie’s knowledge of both theory and practice were invaluable.

Rennie represents an important watershed in engineering when the construction of important civil engineering works began to move from knowledge that was handed down from master to apprentice to the current situation where knowledge from practice is augmented by a firm knowledge of theory.