John Rennie, the 7th Earl of Elgin and Charlestown Harbour

In the ICE’s John Rennie archives there are three letters to Thomas Bruce, the 7th Earl of Elgin written between 1807 and 1808 with proposals for a new harbour on the Firth of Forth at Charlestown in Fife. This was the same Earl of Elgin who, since 1801 had been removing sculptures from the Parthenon in Athens under authority of an official decree from the Ottoman Empire. He had been paying for these with his own funds, estimated at £74,000 (£4.7m at today’s prices), initially to decorate his family seat of Broomhall House near Dunfermline, but he became embroiled in a costly high-profile divorce action which added to his indebtedness and he eventually sold the marbles on to the British Museum for less than half of what he had spent. But this did not happen until 1816, and meantime the Earl was seeking to reduce his considerable debts by maximising returns from his lands and minerals in Fife from when he returned to London in 1806 after three years’ imprisonment in France.

His family’s principal source of revenue by then was from the village of Charlestown on the northern side of the Firth of Forth close to Broomhall House. This had been built by his father, the 5th Earl, in 1759 as one of the earliest industrial complexes in Scotland. Limestone quarries were opened up and connected to multiple lime kilns built close to the shoreline and a new harbour constructed to export agricultural and building lime. The quarries were connected to the kilns by a network of waggonways and workers were housed in 150 new houses forming the new village. Coal was also mined on the Elgin estate and transported to the limeworks for burning in the kilns, with the surplus exported from the adjacent harbour.

Rennie’s involvement with the 7th Earl began in early 1807 when he visited the works at the Earl’s request, submitting a report in May 1807 recommending a much larger harbour be built to enclose the existing harbour built in 1761, which would be converted to a Wet Dock, the only one on the north shores of the Forth. This visionary suggestion would have cost £27,600. Rennie must have guessed that the 7th Earl would be unlikely to have access to such capital and offered a less extensive option for £23,000. In the same report he recommended that the wooden waggonways being used for horse-drawn bulk transport be converted to iron rails for greatly improved efficiency and savings on horses.

The Earl, however, must have requested a more detailed estimate for an enlargement and wet dock, which Rennie duly provides – £21, 125, with a slightly larger scheme for £23,400. The Earl must have requested a detailed Specification, provided by Rennie in March 1808. And there the correspondence ends. After receiving his payment for the Elgin Marbles in 1816, the 7th Earl lived the rest of his life in France and died in Paris in 1841, his estates still heavily encumbered by debt. Lime and coal was still, however being worked, and the harbour had been further developed.

This 1826 map shows the original 1761 harbour at Charlestown: 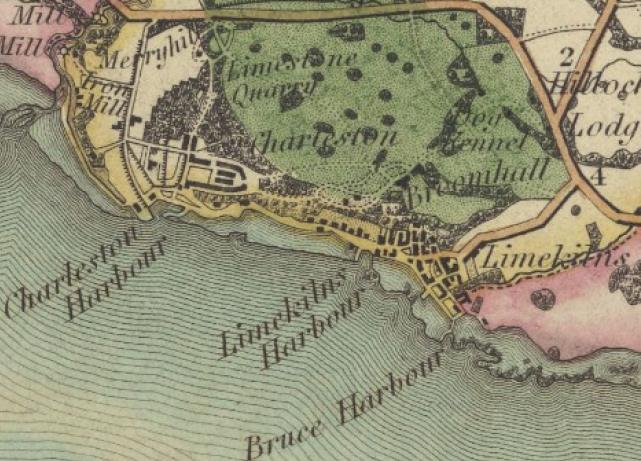 In 1824, an outer pier and return wall was built on the west side, creating new berthing places and shelter from the south west, as shown on this 1854 map: 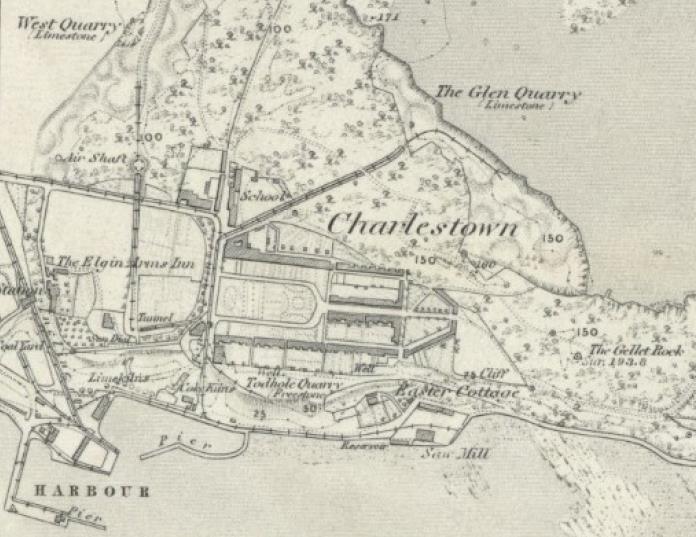 The North British Railway took over the Harbour in 1863, and by 1870 had extended the East pier and quays, evident in this 1895 map. An outer breakwater was also constructed to the west, and enclosed land infilled: 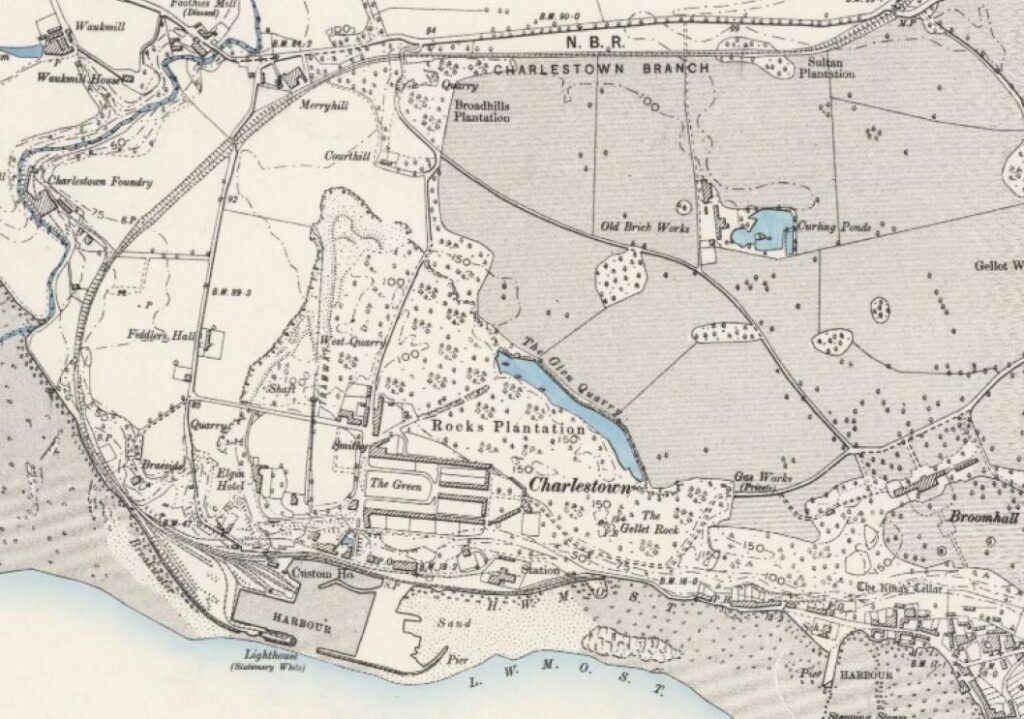 There are similarities between Rennie’s recommendation for West and East piers with return walls, and features such as the coal staithes, although the inner harbour was never converted to a wet dock. The 7th Earl’s shrewd successors would have had the Rennie reports in the Estate archives, and probably borrowed, or at least drew from many of his ideas for the enlargement of the harbour. Whether they were passed on to the North British Railway to inform the East pier designs cannot be known. But Rennie’s vision of a harbour 600ft wide by 240 ft deep was not far from what was ultimately built.
Charlestown was where I was born, when the harbour was still in use as a shipbreaking yard, and steam trains still used the harbourside railway, although lime was no longer being burned in the kilns.

Today, all industry has gone and the site has been developed for private housing, although the abandoned lime kilns remain as evidence of what once was there, and the harbour provides shelter for leisure craft.

Rennie’s reports on Charlestown Harbour earned him another claim to fame in lexicography. He uses the term “Kants” for oblique arms leading from straight piers, and the extracts of his first report on Charlestown Harbour that are reproduced in Samuel Smiles’ “Lives of the Engineers” are quoted by the Oxford English Dictionary as the earliest sources of that usage of the word.

Like Charlestown Limeworks and Harbour, the word “Kant” has not survived the passage of time.