The East & West Fens, a 93 square mile tract lying between Boston & the Wolds to the north, were the major area of fen to be drained in England. Successive piecemeal attempts had been made to drain the area, notably by Sir Anthony Thomas and other Adventurers in the 1630s, when by 1634 the work was adjudged complete, the ground being regarded as ‘fit for arable or meadow or pasture’. For seven years the land was used profitably but then in 1642, just before the battle of Edgehill, the dispossessed fenmen, being on opposite sides to the Adventurers, took up arms and destroyed the sluices, and laid waste the lands, taking possession of the land. 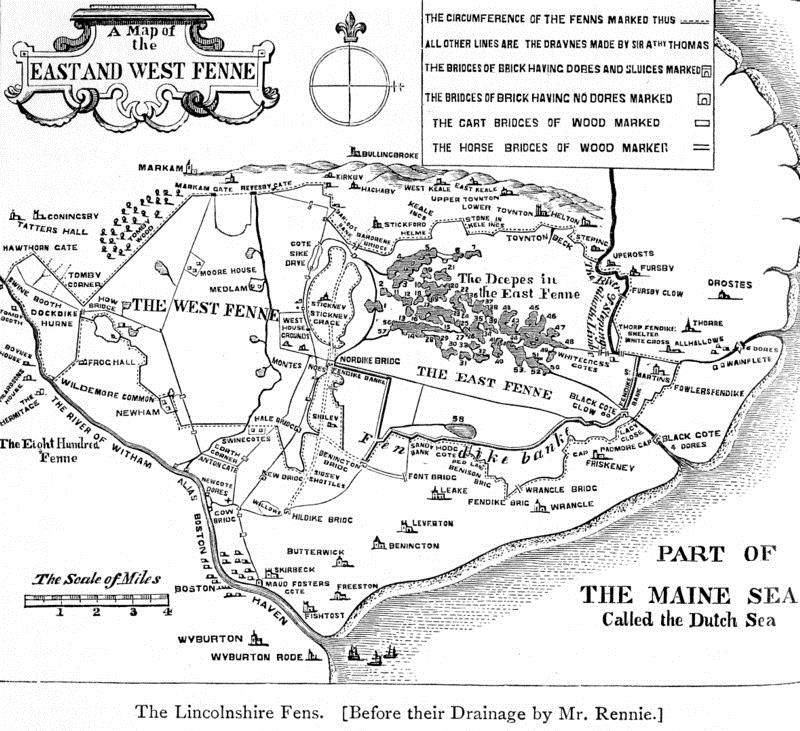 By the start of the 19th century large parts of these fens, particularly the East Fen were still what would today be regarded as an extensive wetland supporting a subsistence economy of summer grazing, wildfowling and fishing. In 1799 at a meeting in Horncastle convened by Sir Joseph Banks, John Rennie was commissioned to report on the draining the Wildmore Fen, but also of draining the East, West and Wildmore Fens as a whole. The fens were surveyed by Anthony Bower and James Murray and Rennie produced a preliminary report dated 7th April 1800: ‘Report concerning the Drainage of Wildmore Fen, and of the East and West Fens’, followed by the ‘Second Report’ dated 1st September 1800. The result was three Acts of Parliament, one ‘An Act for the better and more effectually draining certain tracts of land called Wildmore Fen, and the East and West Fens, in the County of Lincoln, and also the Low Lands and Grounds in the several parishes, Townships and Places, having Right of Common on the said Fens, and other Low Grounds lying contiguous or adjoining thereto.’ A second was ‘An Act for dividing and allotting a certain Fen, called Wildmore Fen in the County of Lincoln’, and the third ‘An Act for dividing and allotting certain Fens, called the East and West Fens, in the County of Lincoln’. The three Acts received Royal Assent on 2nd July 1801, with a further amendment Act receiving Royal Assent on 4th July 1803. Work commenced in 1803 with John Pinkerton as Contractor and Anthony Bower as Resident Engineer.

Hitherto the area had outfalls to the River Witham above Boston at Anton’s Gowt, through the Maud Foster Sluice in Boston, and to the Steeping River above Wainfleet. Rennie’s typically thorough solution was to construct catchwaters round the wold margins of each fen, bringing the upland waters together into an enlarged Maud Foster Drain to a new Maud Foster Sluice, opened in 1807. Provision was made for the lowland waters of the West Fen to be conveyed beneath the catchwater at Cowbridge and into the East Fen. Here they were discharged into a completely new channel, the 13 mile long Hobhole Drain, which with various artificial tributaries now drained into the East Fen, taking the lowland waters to a completely new outfall, Hobhole Sluice, on the Witham estuary four miles below Boston. For both Hobhole and Maud Foster sluices, under construction from 1804, Rennie used portable steam engines to de-water the foundations.

Cowbridge, at the heart of the East and West Fen drainage system, is where Frith Bank, West Fen, Sibsey Trader, Maud Foster and Cowbridge Drains all meet or intersect. Cowbridge Aqueduct is at the heart of it, conveying the high level upland drainage channel over the low level fenland drainage, but because the difference in levels between the two sets of drains is relatively small it is not at first apparent that Rennie’s solid but elegant Aberdeen granite three span structure, built in about 1805, is indeed an aqueduct. In the immediate vicinity, Cowbridge lock and the now derelict East Fen lock provided a navigable link between the East Fen, the West Fen and the high level drainage system between Revesby and Boston.

Having been drained, these fens were enclosed by separate Acts and in 1812 seven new townships were formed- Eastville, Midville, Frithville, Carrington, Westville, Thornton-le-Fen and Langriville, all existing today as villages. By 1814 the Resident Engineer Bower reported that ‘It is satisfactory to state that every wished-for object in the drainage of the whole of the fens and of the low lands adjoining is effectively obtained, and the lowest lands brought into a state of cultivation…There have been within the last five years several extraordinary floods and high tides, which have not in the smallest degree affected the works on the low lands; and at this moment, when the low lands in every part of the kingdom are overflowed by an ice flood, the East, West and Wildmore Fens and low lands adjoining are perfectly free, and as ready for all agricultural purposes as the high country lands.’

As part of Rennie’s scheme, large numbers of brick bridges were built, many still identifiable by the oval cast iron plates bearing the bridge’s reference number in Egyptian-style numerals above the arch. A trio of almost identical footbridges spanned Rennie’s newly enlarged Maud Foster Drain, the high level outfall to his East & West Fen drainage scheme. Two of them, at Cowbridge and Hospital Lane are still extant. The single arch of each bridge is formed by a pair of slender cast iron ribs giving a 61ft clear span with a 3ft 9in rise. The ribs, which bear the inscription ‘Cast at Butterley 1811’ are also curved in plan.

In 1821 an additional 8 sq. miles east of the Steeping River was drained to the East Fen through Thorpe Culvert, built beneath the river for that purpose. The drainage scheme’s layout remains substantially unchanged to the present day, although the inevitable shrinkage of the peat soil in the East fen necessitated the construction of an intermediate pumping station on the Hobhole Drain at Lade Bank in 1867.