Tens of thousands of visitors to the cultural sites of London’s South bank, and many just enjoying the Thames walk at Bankside will have noticed the riverside pub the Founders Arms; they may even have taken refreshment there. This modern building gives little clue beyond its name to the industrial heritage of its location, indeed only the approach viaduct to Blackfriars Bridge suggests any hint of the original Victorian cityscape of the area. However the name of the Founders Arms is intimately connected with John Rennie’s mechanical engineering workshops alongside the river at this spot, and the commission that first brought him to London in 1784, the Albion Mill at Blackfriars, the world’s first steam powered flour mill. 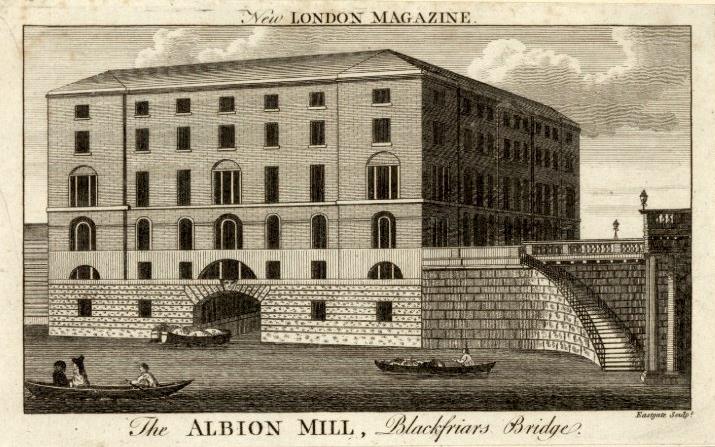 Having trained as a millwright in Scotland with Alexander Meikle and studied science and engineering at Edinburgh University the ambitious 23 year old Rennie came south, having been taken on by James Watt for the Albion Mills job in July 1784 with letters of recommendation from Meikle and the scientist John Robison. He finally arrived at the works of Boulton and Watt at Soho near Birmingham in September 1784.

Watt had recently developed a steam powered rotative engine which offered the potential to revolutionise both textile and flour milling. The architect/engineer Samuel Wyatt was providing the design for a consortium to build a modern flour mill beside the Thames downstream of Blackfriars bridge and was convinced such engines could provide the power to dominate flour milling in London. From January 1783 he worked closely with Boulton and Watt to design the building to accommodate up to three such steam engines and the millwork. Rennie’s arrival at Soho was propitious; and soon proved he was talented enough to design the millwork for such an innovative factory. Having studied the designs and the steam engines he arrived in London on 24 November 1784 and set to work setting out the smithy and engine house and designing millwork almost entirely of cast and wrought iron-for the first time. Previously only shafts had been designed in cast iron but not the gearing. There seems little doubt Wyatt had suggest the idea but Rennie’s skills delivered it. 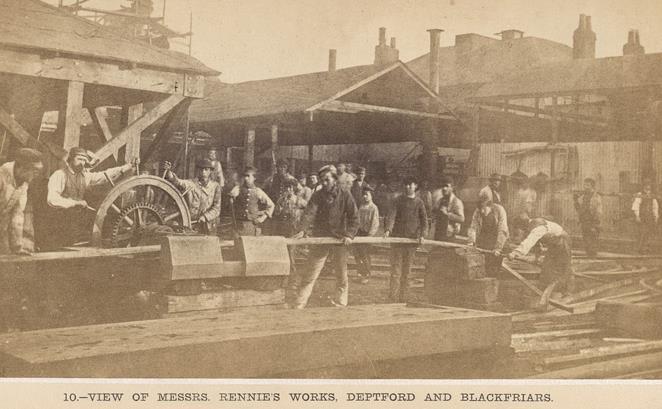 Creating works on this scale presented its own problems. There was a danger of components overheating, but by the spring of 1786 the first engine was at work, and after some teething problems, the Mill threatened to put most other London mills out of business. A second engine was installed in December 1788 but soon after disaster struck in the form of a fire on 2 March 1791, from which the mill never recovered. Part of the building was converted to residential use, but Rennie’s reputation as an engineer and millwright was already secure. He set up his works close by, and from 1794 lived at a house in Stamford Street close by, on a site later occupied by Sainsbury’s factory. The Albion Mills site was subsequently largely demolished for the London Chatham and Dover’s Railway (Goods) Station, while the site of Rennie’s works has long since disappeared, leaving the name of the Founders Arms pub, and Rennie Gardens as the only indication of the this significant industrial site where much of Rennie’ innovative work as an engineer and millwright took place.

The Albion Mills were not only significant for the revolution in flour milling technology they represented, but also or the building foundations designed by Wyatt, the first known example of a raft foundation, comprising a series of barrel vaults to distribute the weight of the building across the whole site.

This article by James Moher on the Mills Archive Trust website explains how Rennie worked as a master millwright in Scotland, before moving to London to manage the Albion Mills project. It explores some of the innovative developments in machinery for which he was responsible and discusses his relationships with leading contemporaries in the field.
https://new.millsarchive.org/2021/12/06/john-rennie-and-the-albion-mills-1784-91/