Perhaps unsurprisingly, after the passing of a couple of centuries, the full role that John Rennie played in the building of the Aberdeenshire Canal is now not entirely clear, but he undertook its detailed design.

There was, at the end of the 18th Century, a real need to improve the means of moving bulk cargo within Aberdeenshire. There was granite and slate, timber, grain and other products to be carried south from the heart of Aberdeenshire and coal, lime and other cargoes to be carried north from Aberdeen harbour into the county. Horses pulling carts were not good enough. A horse pulling a barge on a canal could, however, pull a cargo the equivalent of about fifty cart loads.

For a number of years prior to 1793, the building of a canal from Aberdeen into the heart of Aberdeenshire had been a topic for discussion. In that year, a group of interested parties arranged for a feasibility study to be carried out in relation to the building of a canal from Aberdeen harbour to just short of Inverurie and thence to Monymusk. The line of the proposed canal was surveyed by Captain George Taylor and, encouraged by this survey, the promoters of this venture decided to advance the project – albeit only with a view to building the canal to Inverurie.

By 1794, Captain Taylor had prepared a ground map showing the proposed line of the canal and a report had been prepared which detailed its engineering features. Investors were then sought.

By 1796, the promoters had obtained the necessary private Act of Parliament establishing the Aberdeenshire Canal Navigation Company and giving the new Company the powers required to build the canal. Reflecting the work undertaken by Captain Taylor, the Act set out the route of the canal, the width of the “development strip” to be acquired, the breadth of the canal, its depth, lock sizes and other details. There were to be five aqueducts, twenty culverts and fifty-six road bridges!

It appears that it was only after the passing of the Act that John Rennie was appointed as a consulting engineer. George Fletcher was appointed to act as a resident engineer to oversee the day to day building work. Captain Taylor maintained his role as a surveyor.

Following on his appointment, Rennie progressed the detailed design and engineering work. Given his experience to date, the project would have presented no particular engineering challenges. The canal as authorised was a little over eighteen miles long. It started from beside Aberdeen Harbour (there was initially no sea lock down into the harbour) and was to run northwards to the River Don. It then followed the Don through Stoneywood, Dyce and Kintore to Port Elphinstone, just south of Inverurie. Between Aberdeen Harbour and Stoneywood, the canal would rise 168 feet through 17 locks. From Stoneywood to Port Elphinstone, the canal was a flat “contour canal”, largely following the twists and turns of the River Don.

Construction work did not start until 1798. It appears that local contractors were engaged. The building of the canal was not without its problems – problems of funding, disputes with mill owners with regard to sources of water, disagreements with regard to the compensation to be paid to landowners and all the other problems that often beset the building of any canal.

It was only in June 1805 that the canal opened – but it was not open for long. Within months of the opening, fourteen locks failed, closing the canal for about a year. While it appears that bad building work was blamed for these failures, some re-engineering work may have taken place when the locks were rebuilt. Quite who would have carried out such work is unclear, as it was Thomas Telford rather than John Rennie who was called upon to “sign off” the rebuilding work. Telford was at this time engaged in work at Aberdeen harbour and it was perhaps expedient to involve him rather than John Rennie.

In 1834 and long after Rennie’s involvement, a “sea lock” was built to take the canal craft down into the tidal harbour in Aberdeen. This greatly eased the transhipment of goods and was very beneficial.

While never a financial success for its original promoters, the canal brought great benefits to the communities that it served. It enabled businesses to flourish, reaping the rewards of good bulk transport facilities. Within a year or two of the canal opening, there were seventeen “working boats” carrying freight on the canal. There were also two “fly boats” carrying passengers between Port Elphinstone and the outskirts of Aberdeen.

As with many canals, the arrival of the train heralded the end of the Aberdeenshire canal. In 1845, the promoters of the Great North of Scotland Railway Company then offered to buy the canal at a price of £36,000. Their plan was to construct a railway along at least part of the line of the canal. The offer was accepted, but the Railway Company then failed to come up with the cash. They did, however, agree to pay interest on the unpaid price. The canal therefore continued to operate until 1854 when the price, with interest, was paid – 9 years late.

Sadly, little evidence remains of the canal. The railway followed the exact line of the canal for some miles north from Aberdeen harbour, but bridges generally needed to be raised and were thus rebuilt. Locks and other structures were demolished so that the granite could be reused in building the structures required for the railway. Within Aberdeen City, only Warracks Bridge survives. In the open countryside to the north of Aberdeen, the odd section of canal can be seen where the railway took another course and the canal was abandoned. At least one former aqueduct survives and a few milestones remain, scattered along the line of the former canal. There is not much to remind one of John Rennie! 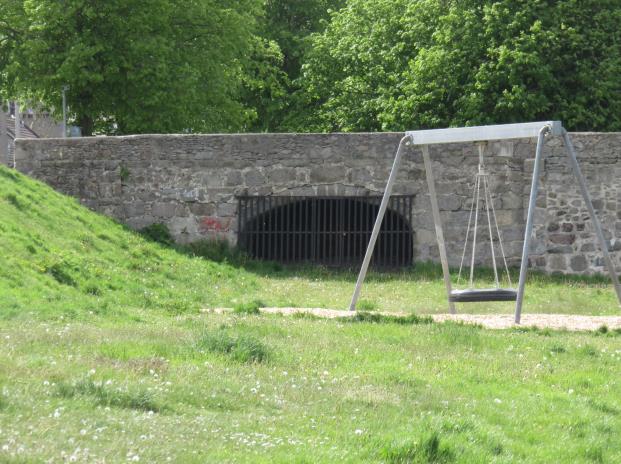 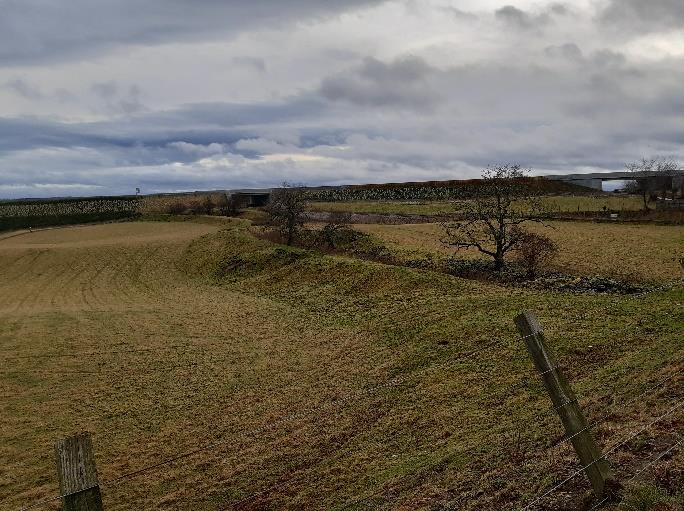