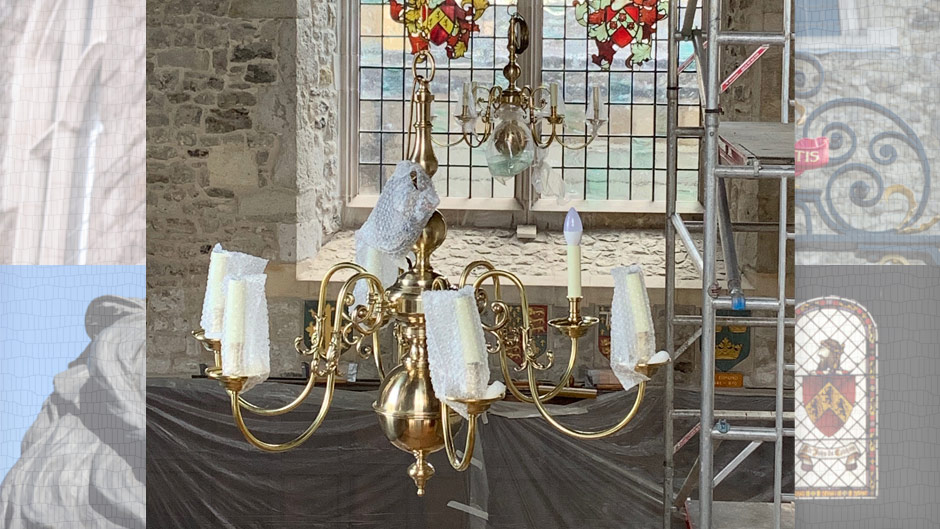 A quirk within our medieval Bridge Chapel has been corrected during the internal refurbishment works.

When the Chapel was brought back to life during its extensive 1937 renovation, a Dutch chandelier had been installed, hanging from the rebuilt roof.

This style of chandelier dates from the 16th century, is usually made of brass or bronze, and is characterised by curling down S-shaped arms and a baluster-shaped body, which provides an ideal reflecting surface if highly polished. Our chandelier is made of brass and has eight scroll branches and a ball. The ball is an important part of the chandelier as it is weighted to prevent it from swinging – something that would have been particularly unwelcome when a building was illuminated by candles.

Here’s a photograph of the chandelier in position before the refurbishment began. 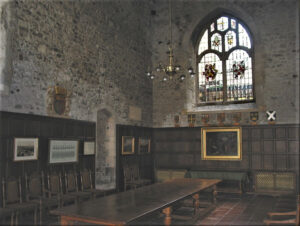 Considering everything we’ve told you about the chandelier, can you see what’s wrong with this picture?

It’s not immediately obvious to the casual observer, but when you consider the positioning of the ball and – more significantly – the fact it was originally designed to hold candles, it becomes a little easier to see that the chandelier has been hung upside down.

We believe this was a deliberate decision to try to provide better light coverage. It’s a good idea, but an inaccurate way to view the chandelier and the room definitely needed better illumination.

For this reason, the refurbishment was a good opportunity to correct the situation. The chandelier was taken down for cleaning when the refurbishment works began, and it has now been re-hung, the correct way up, this time over the staircase in the Bridge Chamber.

Instead, two chandeliers have been installed in the Chapel alongside an array of less obtrusive spotlights, to highlight the refurbished beams and ensure more even light coverage across the room. The new lighting is also all LED, to be more environmentally friendly. 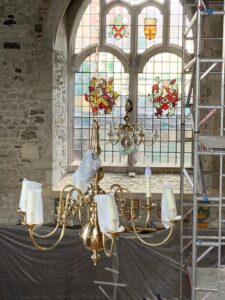