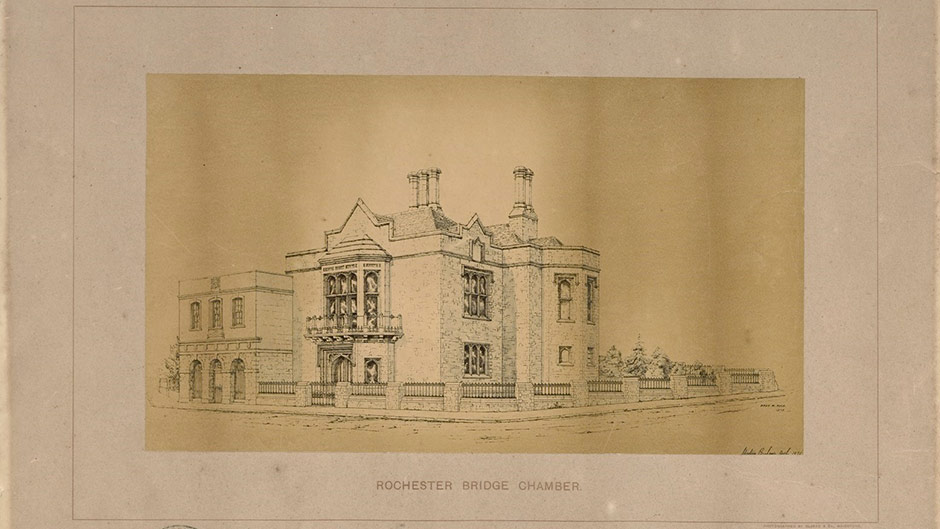 The traditional administrative heart of the Rochester Bridge Trust is the Bridge Chamber, which has for centuries been the location of meetings of the Court of Wardens and Assistants.

Located on the river bank at the end of where the medieval bridge would have stood, the first Chamber is mentioned in the accounts for 1398, and since then it has taken various guises, including comprising the upper story of a house, and sitting above the western entrance to the yard of The Crown Inn.

Today’s building is at the same location as its predecessors, but on a much larger scale. It dates from Victorian times and while it isn’t as old as its neighbours, it sits comfortably between the Bridge Chapel and Rochester Castle.

Walking into the Bridge Chamber, one of the things you notice is that there are a lot of name boards. These record the names of the Founders and Benefactors of the Rochester Bridge Trust, the Wardens, and the Bridge Clerks – in a continuous list stretching back more than 600 years.

For those who really pay attention, you’ll notice two other names, commemorating people who have been important to the Trust, but who do not fall into any of the above categories. One is former Bridge Engineer Thomas Telford, who needs no introduction, the other is architect and surveyor to the Trust Martin Bulmer.

So who was this second person and why was he so important?

Martin Bulmer held the post of Architect and Surveyor for the County of Kent from 1860-1878, during which time he worked on a number of notable projects for councils, charities and lords from across the county, including the Watts Charity and Lord Darnley. At the same time he was also Bridge Architect to the Trust.

His most notable commission for us was towards the end of his tenure, when he drew up the plans for the Victorian Bridge Chamber. Here’s one of his sketches of the Chamber, which we are sure you will find familiar. 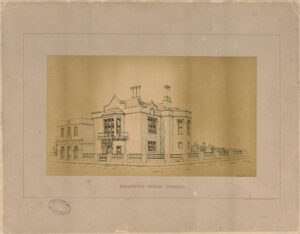 At an estimated cost of £3,200, the plans were approved in January 1878, with construction beginning in June of that year. However time was not on Mr Bulmer’s side, and a note in the minutes for a May 1878 meeting of the Court of Wardens and Assistants refers to him as having a “severe illness”. At about this time he is thought to have stepped down as County Architect, however he continued working with the Trust, submitting his final progress report in June 1879, and witnessing completion of the Chamber’s construction in July. He died a few months later in October, a loss that must have been felt within the Trust to have prompted his name on this commemorative plaque. 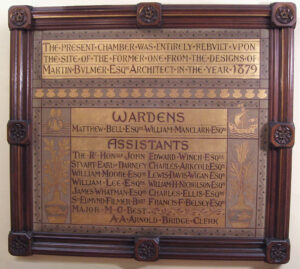 He is buried in nearby St Margaret’s Church, Strood, where this memorial can be seen. 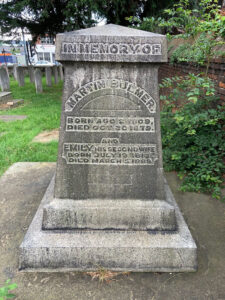 Martin Bulmer had lived next-door-but-one to the church, in a rather splendid 16th century house called The Gables, on Church Street. This area has since been replaced by the High Street, but it’s worth looking up a picture in the local library, where you’ll see internal photographs showing magnificent wood panelling and stone fireplaces.

It’s nice to think he was able to walk from home, across the bridge and onto the Esplanade to witness completion of the Bridge Chamber building.