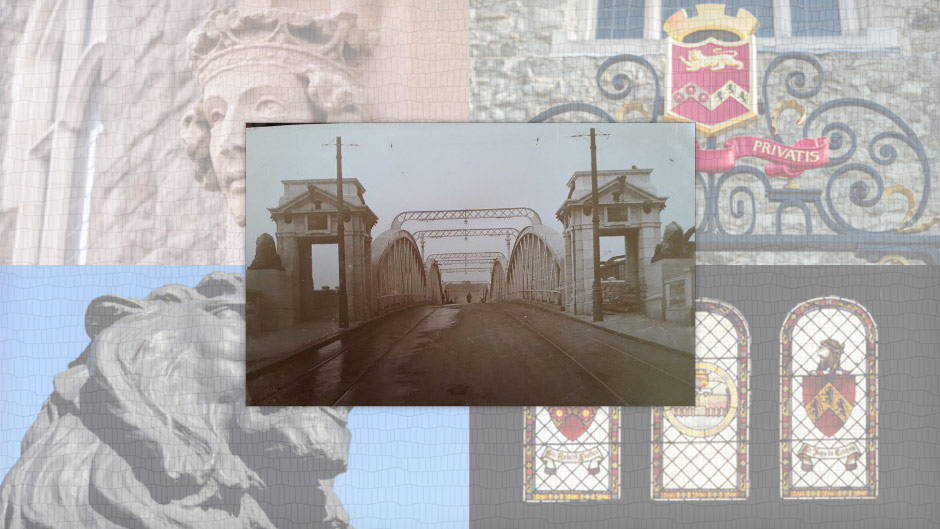 When it comes to heritage engineering, the possibilities for unexpected discoveries – even when you have an extensive archive or records – are endless.

We spent years preparing for the Rochester Bridge Refurbishment Project, carrying out a range of desk-based and on-site research, but even with all of this we knew there would still be a selection of unknowns that would impact our work.

One big unknown that’s come up is the discovery of parts of an old tramway, that were found on the deck of the Old Bridge. We’ve already implemented a solution to this discovery that means the works won’t be delayed as a result of the find, but there’s been so much public interest that we’ve decided to use this Bridge Engineer’s Blog to explain what was found, why it’s an issue and what was done about it, starting with a little background information.

When was there a tram system over Rochester Bridge?

The system was quite short-lived, lasting around 24 years. It was installed around 1908 and removed in 1932. 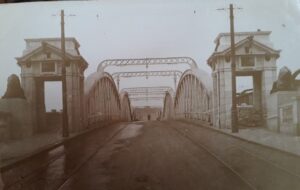 What happened when the trams stopped running?

In 1932, the trams stopped running and the tracks were no longer needed.

It’s likely the tracks remain under the roads in other places around Medway, where they would simply have been surfaced over. However, the thickness of the surfacing material on a bridge is critical because the weight of the material adds a significant load to the structure. This meant it was not practical to simply surface over the tracks as was done on normal roads in a lot of other places.

The tracks and fixings on the bridge needed to be removed, the concrete underneath repaired, and a new surface of the same thickness laid. This is what the 1930s contractor was instructed to do and – as far as our records show – all the track itself has been taken up.

Why is the bridge surface being dug up?

In the current project, the Trust is trying to solve a problem which has caused deterioration to the steelwork which forms the structure of the bridge on the section known as the Old Ships’ Passage. This is the final span on the Strood side of the river, which was originally built as a swing bridge.

Water has been leaking through the deck of that span for a number of years. It’s been closely monitored and maintained, however it had reached the point where the leak was causing extensive localised corrosion and the time had come to tackle the problem.

Underneath the bridge the deteriorated steel was repaired, replaced and painted earlier in the project. Here you can see before and after photos.

Having now repaired the structure, it is essential that the water is stopped from leaking through the deck and causing the problem to happen again. This is done by putting a layer of waterproofing material between the concrete deck – which sits on top of this steelwork – and the driving surface material.

To apply the waterproofing the black road surface has to be completely removed to reveal the deck of the bridge. This is done with a mechanical planer and hand tools. The next stage is known as “fine milling” using a machine with a spinning drum equipped with many “picks” to clean off any remaining surface material and provide an even surface with the right texture for the waterproofing to be applied. This process also reveals any areas where the concrete deck is not sound enough for the waterproofing.

Why hasn’t this been found before? Surely the bridge has been resurfaced loads of times since the 1930s?

The Old Bridge has been resurfaced a number of times, but usually only the top layers of the asphalt surface are removed. It is very unusual to remove all the layers to get right down to the concrete bridge deck itself and this hasn’t been done for many decades. We have only done it this time because we needed to do repairs to the deck and install a whole new waterproofing system.

What has been found?

As the fine milling machine moved along the exposed deck, it revealed the concrete repairs that were undertaken in 1932, when the tramway was dismantled.

The tram tracks themselves were completely removed in the thirties – we’ve found no actual track – but more problematic are the various associated pieces of metal and timber. These are embedded deep into the concrete, causing the area to crack over the decades.

The lines you can see in the photograph below are the concrete repairs where the tracks had been.

The old concrete is not in very good condition and all of these areas had to be repaired before the waterproofing could be applied – the contractor got onto this straight away. 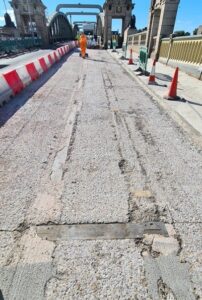 Why didn’t you pick up these features in surveys before the works started?

The “non-intrusive” surveys we can do through a road surface can pick up metal, pipes and cables. However the metal we have found here is a the same level as the steel reinforcement inside the concrete deck and could not be seen as a separate feature. The other remains are timber and stone, and the deteriorated areas are old concrete, none of which would show up on a survey. Luckily we’ve developed a solution quickly, meaning this finding will not hold up the works.

Why not just remove the metal and timber?

We could remove these features but we have to assume they would be quite difficult to extract, as the engineers in 1932 decided to leave them there despite removing the rest of the tramway.

More significantly, if we have to cut round to remove them we would be left with some very deep concrete repairs. This concrete would need to cure and harden – which can take at least seven days – before we could move on with the rest of the work. This is something we clearly want to avoid.

Why not just lay the waterproofing and surfacing over the top of them as before?

If we just sprayed the waterproofing material over these features and the various cracks, the membrane would soon crack and split and the water would start coming through the deck, damaging the steel underneath once again.

The overall objective of this project is to make sure that essential maintenance is done properly, and to make sure major repairs are not needed again for a long time.

The 1930s poor concrete repairs on the line of the old tram tracks have been repaired and smoothed out.

The metal plates have been left in place. They have been treated to stop them rusting and to make sure the waterproofing will stick properly.

A layer of (white) waterproofing was sprayed right across the whole surface of the repaired deck to create a continuous membrane to stop the water getting through to the steel structure again. Then a sticky (red) tack coat was applied on top. The final stage are the black asphalt layers.

The remains are a part of the history of the structure and will be properly recorded for our archives.