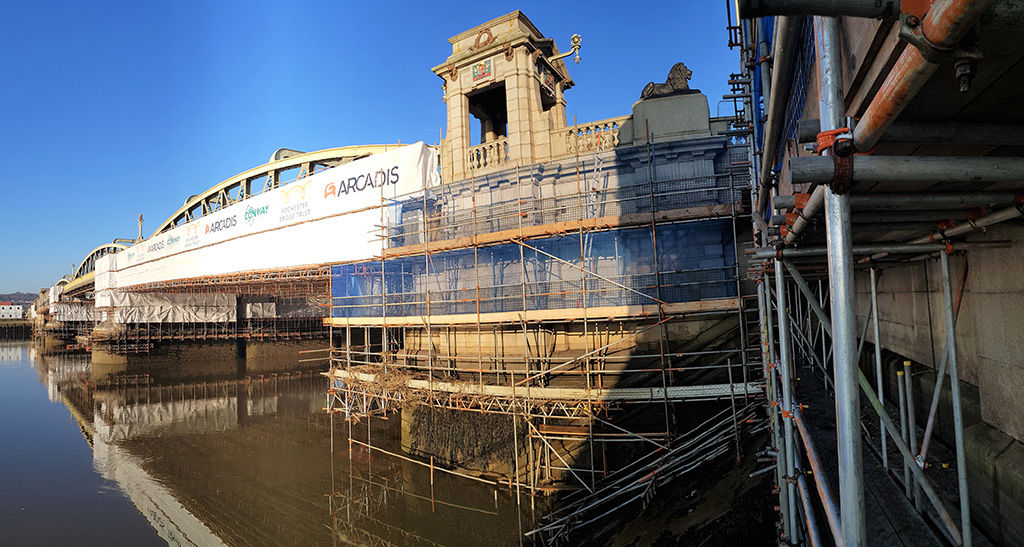 The river wall: an overlooked feature

Of all the structures that the Rochester Bridge Trust owns and maintains, you’d be forgiven for not including the words ‘river wall’ on the list. While a bridge is an obvious structure across the river, the wall along the bank is easy to overlook.

We’ve alluded to the wall before, in the Bridge Engineer’s Blogs relating to the Esplanade investigations of a few years ago – those investigations were fundamental in helping our planning of the refurbishment work that has started in this area.

The investigations were important because although we knew the Esplanade and river wall were built when the medieval bridge was demolished, we did not have a clear picture of the condition of the material – dismantled bridge rubble – that had been used during construction or any records on the shape (profile) or foundations of the river wall. We have hundreds of years of archives, but some people were better at creating and keeping records than others.

So what are we doing to the river wall?

At the start of the refurbishment contract we installed a large French drain to collect water which percolates through the surface, so it now passes out into the river through a new flap in the wall. The flap will prevent tidal water from passing back through the wall. We have also filled in the redundant lavatories and repaired the surface above to make it safe.

We recently shared some photographs on social media, showing inside the scaffold tower that has been erected on Rochester Esplanade. For those who missed that update, the tower has been put up around an ornate lamp column, so that a detailed survey can be carried out and the old paint removed safely before it is refurbished. The scaffolding is encapsulated to make sure none of the old paint escapes.

Beneath the tower, more scaffolding is in place along the river wall. Here, Paye Stonework has been infilling the redundant windows of the old toilet block with granite slabs from the same Cornish quarry (De Lank) that supplied the stone for the wall’s original construction in the 1850s.

This is just the start of a significant programme of river wall works which includes the installation of further scaffolding to provide safe access for the contractor to be able to:

• Repair some cracks in the surface of the river wall;

• Replace mortar and re-point joints; and

• Make repairs to the balustrade.

It’s worth noting that while these works are not major changes to the construction of the wall, they will take time. The balustrade is a surviving element from the old medieval bridge and as an important historical feature it is a listed structure: great care needs to be taken with the work. Also, at this point in its journey the River Medway is tidal, which means access to the wall – and indeed parts of the bridge – can be restricted for large periods of the day.

Hopefully this introduction answers your questions about the refurbishment works, and gives you a new appreciation for an area you have probably often overlooked!