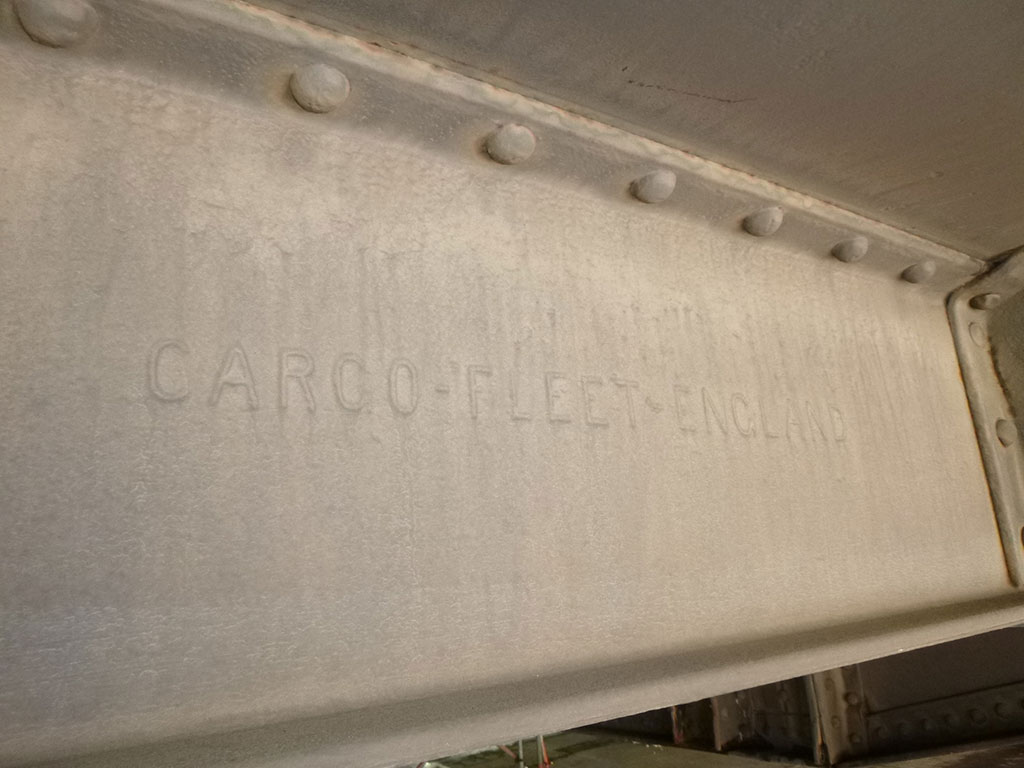 Steelwork gives a glimpse of history

As work continues on the Old Bridge, details that are normally hidden from view are being revealed and help tell a story about the structure’s history.

Visible from the scaffolding are the steel girders of the underdeck, and on some of them is the wording “Cargo – Fleet –England”, which marks them as being from the 1911-14 reconstruction of the Victorian crossing.

The deck of the Victorian bridge – which was designed by Sir William Cubitt in the 18502 – was originally supported from underneath by cast-iron arches. When the bridge was reconstructed, the ‘legs’ (piers) of Cubitt’s bridge were retained but the roadway was raised and suspended from new steel bowstring trusses above. The deck of the bridge needed to be stiffened before the supporting arches below could be removed and this was done by adding a number of additional girders to the underside of the bridge.

The wording on the girders tells us this steel was provided by Cargo Fleet Iron Co, which was originally called Swan, Coates and Co and established in 1866. Later a subsidiary of South Durham Steel and Iron Co, the company ceased to exist in 1953 but its name was retained as the company had a worldwide reputation. It’s nice to know our bridge is a part of this history.

Why are we looking at these girders today? Well as much as the visible parts of the bridges will benefit from a lick of paint, the underdeck will too. The paint protects the steel from corrosion, and is particularly important near salty water, as we have in the tidal River Medway.

As part of the Rochester Bridge Refurbishment Project, FM Conway is renovating the girders as part of the major refurbishment process. The condition of each individual girder is reviewed and treated according to the level of any corrosion. The paint and any rusty areas are cleaned using a needle gun and other hand preparation tools to get back to a clean surface. This is then inspected by one of our engineers.

If there is any loss of metal we might choose to fill the holes, or we may insert, stitch or replace areas of steel, whereas in most cases all that’s needed is a new coat of paint. For example, in the picture below, you’ll notice one girder is shinier than the rest because it’s part-way through the clean-up process and has been coated with Aluminium Epoxy Primer. 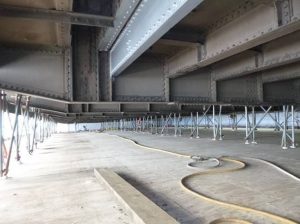 You may be relieved to know our inspections are revealing the steel to generally be in excellent condition, which is testament to the ongoing maintenance carried out by the Trust. A few localised areas have been identified as in need of a little more attention, as described above, but no structural steel replacement has been identified. This is in keeping with our expectations based on previous visual inspections.