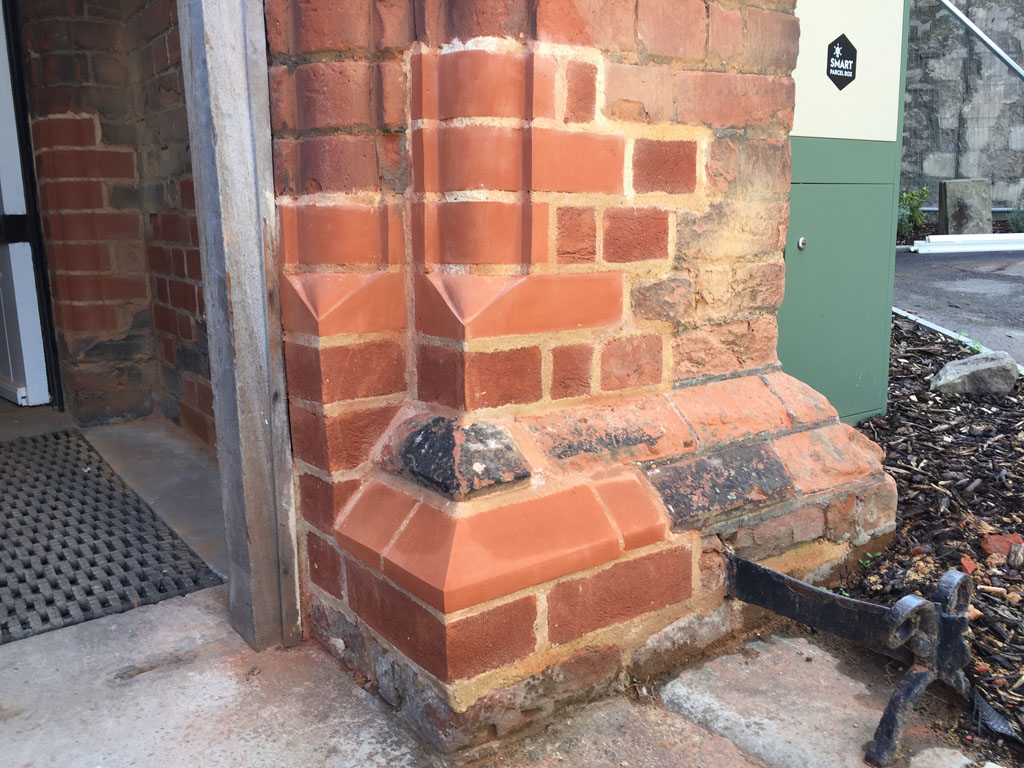 Attention to detail has given an historic doorway a new lease of life, thanks to the efforts of specialist craftsmen.

The doorway – which is the entrance porch to St Andrew’s House in the Precinct of Rochester Cathedral – was built in the early 1870s, as part of an extension to a considerably older building. Years of impact damage and weathering meant the brickwork below knee level had been heavily damaged.

Sue Threader, Bridge Clerk to the Rochester Bridge Trust, explained: “There was nothing structurally wrong with the damaged bricks, and they could have been left as they were, but we had the potential to prevent further damage and to improve the frontage of an historic building, and so we did.”

The bricks had been victim to impact damage and freeze-thaw action (the same action which leads to the creation of potholes in roads), which had been accelerated through the inappropriate use of cement mortar during previous repair work.

Claire Brown, of Savills, explained: “While the damage was not structural, the presence of cement mortar was increasing the rate of decay of the historic brickworks. As a starting point, simply removing the cement has reduced the long-term damage.”

The bricks themselves are a type known as ‘red rubber’ or ‘soft red’, which is created using the finest, sieved clay. The replacements were made by a company called Lambs Bricks and Stone, which uses Kent brick earth at its brickworks in Faversham. The lime mortar used was colour-matched to the older, yellow-coloured lime mortar found in some areas of the wall. This used a sand aggregate of a similar particle size to the original materials.

Rubber bricks are fired to a lower temperature than modern frost-resistant bricks, below the 900°C at which vitrification occurs. Vitrification is when certain minerals within the brick fuse into a hard, glassy, non-crystalline material. It is this glassy material that imparts strength to ceramics, it also significantly reduces water resistance and permeability – without vitrification having taken place, red rubber bricks are relatively soft in comparison to a normal brick.

This softness enables them to be cut to exact sizes and shapes – such as those seen at St Andrew’s House – but it also renders the bricks more susceptible to damage over time.

A surveyor from Lambs Bricks and Stone visited the site to measure the size and shape of the existing bricks and create a set of 3D templates. The brickworks then produced exact replicas using cutting and sanding techniques.

Before the new bricks could be set into place the damaged area had to be carefully removed. This was carried out in consultation with the local Conservation Officer to avoid damaging the surrounding brickwork. The repair skills of main contractor BW May’s tradesmen was invaluable in achieving a tidy finish.

The new bricks are likely to look newer than the originals for some time, but natural weathering has already begun, meaning they will gradually become much less obvious.

Claire added: “The important thing is that the authenticity of the original brickwork has been respected with a skilled and conservative repair.”