Hay for an historic health and safety notice

One of the (we think many) things that makes the Rochester Bridge Trust special is its adherence to tradition. There has been an unbroken chain of Senior Wardens since 1383; the founders are commemorated with an annual Latin mass; and when the headroom of a span is reduced from its usual limits, a bundle of hay is suspended from the Old Bridge.

This ancient and unlikely sounding practice concerns the impact of works on navigable (open to river traffic but with a reduced headroom) spans of the bridges and is still in use as a requirement by the Strategic Harbour Authority for the River Medway. This may sound rather bizarre in today’s world of rapid communication, and the origins of the practice aren’t precisely known, but the bale of hay really is a good method for telling river traffic there’s a hazard ahead.

Our theory as to why this became a convention goes something like this: In the past, horses were commonly used to move people and materials, meaning hay was essential to keep them fed. Bundles of hay were therefore probably readily available, and cheap to buy.

Bundles of hay can also be made quite big while remaining relatively light, meaning one hanging under a bridge could be easy to see from a distance. When hung from a bridge on a rope the bundle would also most likely sway in the wind, making it both more visible and easier to be pushed out of the way in the event of a collision – and not too damaging should you accidentally hit the hay.

For the current Rochester Bridge Refurbishment Project we are not hanging a bundle of hay from the bridge because of the way the underdeck works have been organised so that individual spans are closed, rather than open with reduced headroom.

Rather than working on the entire underdeck at once, lead contractor FM Conway is instead following a similar plan to the above deck activities and working in phases. This means the underdeck scaffolding is also being erected in phases, ensuring at least one navigable span is open at all times, rather than all open with some reduced headroom.

We admit, we had been looking forward to the novelty of hanging the bundle of hay, but we’re sure you’ll all agree the safety of river users and workers comes first. Being able to clearly indicate which span of the bridge is open and which is closed – especially when considering the tidal nature of the River Medway at Rochester – is a much safer and less confusing option than keeping all the spans open but with changeable heights.

Which means that instead of a bundle of hay three red discs can be seen suspended from the closed spans – as important as our traditions are, safety must come first. 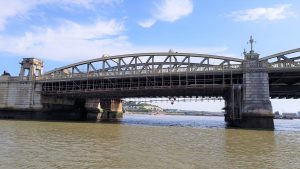