History in the making

Historians, editors and interested members of the public have celebrated the completion of an ambitious project to highlight the county’s past.

After almost a quarter of a century of work, the tenth and final volume of The Kent History Project – Early Medieval Kent – was launched last week at the Kent History and Library Centre in Maidstone. 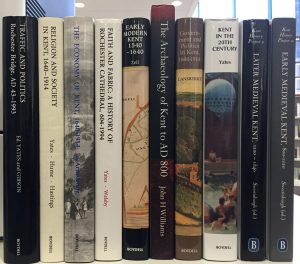 The 10-volume project provides the first authoritative history of the county to be published since 1796. Originally proposed in 1989, the first volume, Traffic and Politics: The Construction and Management of Rochester Bridge AD43-1993, was published when the scheme officially launched in 1994.

As part of its grant scheme, the Rochester Bridge Trust fully-funded the first book and provided £2,500 in support for each subsequent volume, with an additional “guarantee against loss” should any of the titles be commercially unsuccessful.

The initial editor of the project was Professor Nigel Yates, a renowned ecclesiastical historian who held the post of Archivist for Kent. When Professor Yates left the county, the editorship was taken up by Ian Coulson, a well-known Kent historian.

Bridge Clerk Sue Threader explained: “For the past ten years I personally corresponded with Ian about the completion of the project – it was a mammoth task involving liaison with and motivation of dozens of historians, which the Trust supported financially (and emotionally) for 22 years.”

“Very sadly Ian passed away last December, just before completion of the final volume, but I am sure he would be proud to see these ten books together.”

Early Medieval Kent is the tenth and final volume issued by the Kent History Project. It accompanies nine previously-published books: The Archaeology of Kent to AD800, Early Modern Kent 1540-1660, Religion and Society in Kent 1640-1914, Government and Politics in Kent 1640-1914, Economy of Kent 1640-1914, Kent in the Twentieth Century, Later Medieval Kent, Faith and Fabric – A History of Rochester Cathedral AD604-1994 (with the Friends of Rochester Cathedral) and the previously-mentioned Traffic and Politics.