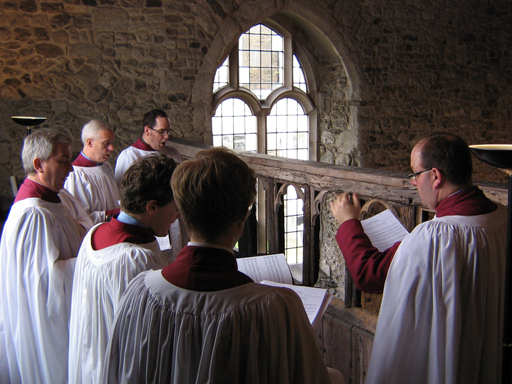 On 2nd November, All Souls Day, the ancient Rochester Bridge Chapel was used once again for its original purpose, when a service was held to commemorate the founders and benefactors of the Rochester Bridge Trust.

In the winter of 1381 the river Medway froze. When the weather warmed, the much repaired Roman bridge was finally swept away by floodwater and ice floes rushing downstream. Sir John de Cobham, who lived at Cooling Castle, and his acquaintance Sir Robert Knolles, a wealthy knight who had fought alongside Sir John in the Hundred Years War, joined forces to build a new stone bridge in 1391. They also persuaded other benefactors to make donations of land and property for the perpetual maintenance of the new bridge. This charitable co-operation led to the foundation of the Rochester Bridge Trust in 1399.

Sir John de Cobham also established the Bridge Chapel, which was dedicated to All Souls, hence the service held each year on All Souls Day. The tiny chapel once supported three chaplains to minister to the needs of travellers and pilgrims crossing Rochester Bridge. The chapel was suppressed during the Reformation and over the centuries was used as a storeroom, shop, pub and private house, until it was repaired and restored by the Bridge Wardens in 1937. It is one of only six or seven bridge chapels in the UK which still survive today.

Even today, the entire income of the Trust comes from those original donations in the 14th and 15th century. Rent is collected from farms, shops, industrial units and houses. Interest is earned on financial investments. All the income is invested by the Trust to maintain its road and service bridges at Rochester, to build reserve funds for the eventual replacement of the structures, to make charitable grants, and to manage the Trust’s affairs.

It is thanks to the foresight and generosity of the original founders and benefactors that it is still possible, over six centuries later, for the Trust to provide its services completely free of charge to the public. Nowadays, the Bridge Chapel is used for meetings and functions, but once a year this special service is held to honour the memory of those public-minded people and give thanks for their great vision in the very building that was part of their original work.

The Rochester Bridge Trust is a charitable trust that exists to maintain the bridges and serve the travelling public. The Trust has served the people of Kent for centuries by providing crossings over the River Medway and making charitable and educational grants. It is the only surviving bridge trust still serving its original purpose and it has served the people of Kent since 1399. The Trust derives all its assets from endowments of land and money in the 14th and 15th centuries, and they are carefully managed in order to provide an income to fund bridge maintenance and local charitable grants. The Trust receives no external funding and is regulated by the Charity Commission.

The Rochester Bridge Trust comprises twelve Wardens and Assistants – three nominated by Medway Council, two by Kent County Council, one by Maidstone Borough Council, and six elected from the local area. All are unpaid.