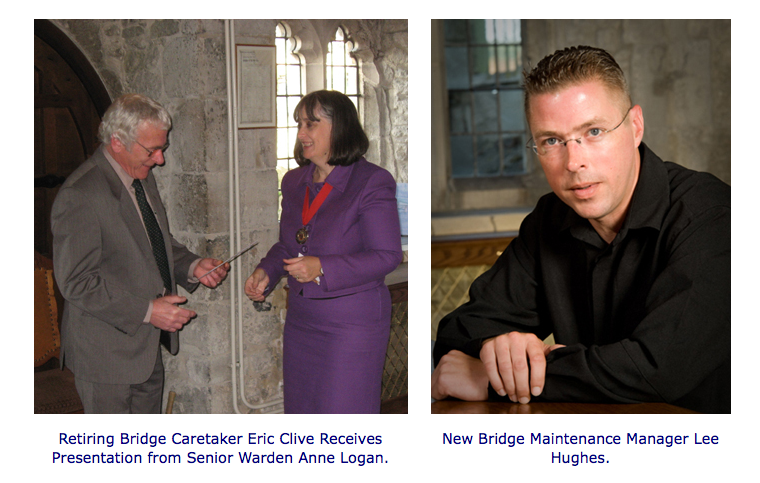 Changing of the Guard for the Rochester Bridges

The old and new bridges at Rochester are now in the safe hands of new Bridge Maintenance Manager Lee Hughes following the retirement of 14-year veteran caretaker Eric Clive in November.

The Bridge Maintenance Manager, formerly known as the Bridge Caretaker, is responsible for the old and new bridges at Rochester, which are owned and maintained for use by the travelling public by the Rochester Bridge Trust. Consulting engineers, Mott Macdonald, advise the Trust on structural engineering and major works, but the day-to-day care of the bridges is the responsibility of a small team of skilled craftsmen.

Eric Clive retired after 14 years of service to the Trust, 10 of which were as Bridge Caretaker. Eric lives in Strood with his wife, Rose, and plans to play more golf and finish the extension he has been building on his house, as well as spending time with his grandchildren.

Taking over from him is Rochester resident Lee Hughes, who has worked for the Trust since 1990, when he joined as a 16-year-old trainee. To prepare for the role of maintenance manager, Lee received on the job training in joinery and cabinet-making and attended external courses, mostly at Mid Kent College, where he trained in engineering craft, mechanical production, electrical installation, welding and plumbing. He won prizes for outstanding achievement while studying.

“The Trust’s priority is ensuring that the old and new bridges remain in good condition and Lee will play a key role in ensuring that we continue to do this”.

“Lee will have a hard act to follow as Eric has led the care of the bridges so magnificently for the past decade. The small team here at the Trust will miss him very much, but we are sure that Lee will do a great job. He has nearly 20 years’ experience of working on the bridges and has produced very fine joinery and furniture for the Bridge Chamber.”

Lee will be supported by newly promoted Assistant Bridge Technician Gareth Edwards from Longfield. The Trust hopes to recruit a new trainee in the next year to ensure it continues to have the services of well trained and multi-skilled staff to take care of the bridges for the future.

1. The Rochester Bridge Trust is a charitable trust that exists to maintain the old and new bridges at Rochester and serve the travelling public. It is the only surviving bridge trust still serving its original purpose, and it has served the people of Kent since 1399. The Trust’s assets all derive from endowments of land and money in the 14th and 15th centuries and are carefully managed in order to provide an income to fund bridge maintenance and local charitable grants. The Trust receives no external funding and is regulated by the Charity Commission.

2. While both bridges are currently in good condition, it is expected that the Old Bridge, which was last replaced in 1914, and the New Bridge, which was built in the 1960s, will both need to be replaced this century. The Trust is ensuring that capital is saved to fund this.